Welcome to the Slade Discography Website, launched in 2017 and dedicated to the discography (and related solo work) of the British rock band Slade. The website is a non-profit resource which is made freely available to everyone interested in the band's extensive recording career.

This website has its origins in the Slade Cove website which was launched back in 2010, alongside my work on the band's Wikipedia content. As a result, it is worth mentioning here that some of the information on the website can also be found on Wikipedia. Here, however, there are additional articles, including on solo-related material too, along with additional information.

A lot of research has gone into the creation of these articles over the years. The main sources include magazines of the various Slade fan club incarnations, books on the band along with individual biographies, and press coverage such as music magazines, newspapers etc. I hope that the work on Wikipedia and this website will be enjoyed by Slade fans, while also promoting the band's vast recording catalogue. 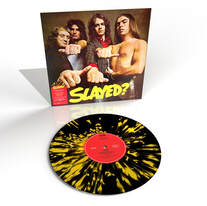 This limited edition release has a yellow splatter effect on the vinyl.