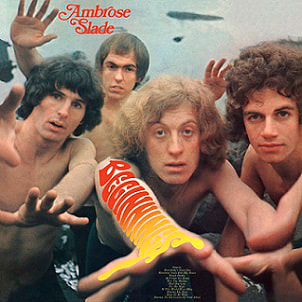 Beginnings is the debut studio album of Ambrose Slade, before they achieved fame as Slade. It was released on 9 May 1969, but failed to enter the charts. In the US, it was released under the title Ballzy. Later in 1975, the album was briefly re-released by Contour as Beginnings of Slade but was quickly withdrawn from sale due to copyright issues.

Beginnings is a mixture of self-penned songs and cover versions including two tracks by Steppenwolf. As to confirm the diversity of the group's influences, they also cut Ted Nugent & The Amboy Dukes' "Journey to the Centre of Your Mind", "Ain't Got No Heart" by Frank Zappa & The Mothers of Invention, The Moody Blues' "Fly Me High", Lennon and McCartney's "Martha My Dear" and "If This World Were Mine" by Marvin Gaye. The artwork for the album featured a photo of the band on Pouk Hill in Walsall. The band didn't enjoy the photo session due to the cold weather, which was later told in their 1970 song of the same name.

Today, an original vinyl copy in decent condition now fetches anything up to £500 at online auction. The album has been featured as part of John Peel's Rarest Records documentary.

Background
Slade had originally formed as The 'N Betweens in 1966. Aside from recording the odd, unsuccessful single, the band mainly concentrated on building a reputation on the UK's live circuit. In February 1969, Jack Baverstock, the head of A&R at Philips Records, took an interest in signing the band after hearing two of their demos, recorded during 1968 sessions with producer Martin Irving. Baverstock soon offered to sign the band if they changed their name to Ambrose Slade and found London-based management. Despite their concerns of losing the reputation gained as the 'N Betweens, the band agreed. The name Ambrose Slade was inspired by Baverstock's secretary, who had named her handbag Ambrose and her shoes Slade. Baverstock soon found them an agent, John Gunnel.

The band spent a week in the Philips studio at Stanhope Place recording Beginnings with engineer Roger Wake. Having thought the band's demo of "Mad Dog Cole" was great, Baverstock insisted the band write more material of their own. The three other originals, "Roach Daddy", "Pity The Mother" and "Genesis", were then written within days. In a 1980 interview, Jim Lea recalled: "This was our first major crack at making a record, so it was all important now to let it slip. So we did "Roach Daddy", "Mad Dog Cole" and "Genesis" out of total fear. "Pity The Mother" was another one of the songs that Bavistock "forced" us to write." At a time when the band were not yet fully writing their own material, the album contained eight covers of songs the band regularly played as part of their live-set. Of the covers, Lea said: "They were all numbers that we were doing live on stage at the time. We had started to move away from the Flower Power thing then, but we were still doing unusual numbers. You can see by all the writers of the songs, they are all big names now, but at the time they were unheard of. Frank Zappa - he was totally unknown, he had only recorded one album, but we recorded his "Ain't Got No Heart"."

During the recording of the album, Ambrose Slade would be introduced to Chas Chandler, who visited the band in the studio with his business partner Gunnel. Impressed by what he heard in the studio, Chandler decided to watch the band perform live at Rasputin's club the following night. By the end of the show, he decided that wanted to manage the group and soon became the band's manager.

In May 1969, Beginnings was released, along with the single "Genesis", however both failed to chart. This was despite a promotional video being shot at London's Euston Station to promote the album. Following the lack of commercial success, the band and Chandler began considering their next career move. Having not been pleased with the debut album, Chandler thought the band would benefit from writing their own material and a change of image. The band would record two further singles for Fontana until Chandler moved the band to Polydor, where they would later achieve a commercial breakthrough in 1971.

Speaking of the album's release and lack of commercial success, Lea said: "It dropped drastically. But that wasn't the point, you see it got us the footing in London, so it was a case of mission accomplished for us. Chas Chandler took us over. We still had some time to run on our contract with Bavistock, so we released our next two singles on Fontana. There were some internal hassles between Chas and the new boss of Fontana, and the next thing that I knew was that we were out of the Fontana deal. Chas had connections with Polydor, due to when he managed Jimi Hendrix, so we signed a contract with them."