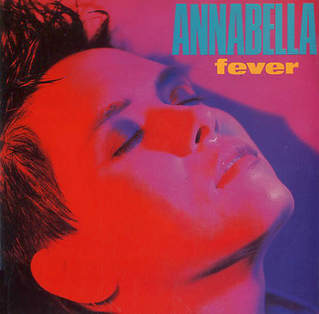 Fever is a single from the Anglo-Burmese singer Annabella Lwin, released by RCA in April 1986. A cover of the 1956 Little Willie John hit, "Fever" was written by Eddie Cooley and John Davenport (Otis Blackwell), with Lwin's version produced by Jim Lea. It was released as the first and only single from her 1986 solo album of the same name.

Background
Lwin originally rose to fame as the singer in the new wave band Bow Wow Wow. By 1983, tensions within the band led the members to oust Lwin and form their own new group Chiefs of Relief. Lwin then embarked on a solo career, remaining on Bow Wow Wow's label RCA. In 1985, Slade's accountant, Colin Newman, put Jim Lea in contact with Lwin, and a deal was made for him to produce a cover of Alice Cooper's "Schools Out" for Lwin's upcoming solo album. On the condition that he completed the recording session in three days, Lea had little time to prepare but was able to successfully produce the song for her.

In early 1986, Lea spent another three days with Lwin in Portland Studios, London, to record another song. "Fever" was chosen after Lwin began singing the song as a microphone test. Lwin told Paul Cole of Sandwell Evening Mail in 1986: "It was totally unplanned. I was testing out a microphone in the studio and I began to sing "Fever". Jimmy started nodding his head energetically and asked me to sing some more. In the end I did the whole song and we recorded it. It all happened within a few hours and it just came off the top of my head. I like the song but I had never even considered doing it myself."

Speaking of working on the song, Lea said in a 1986 Slade fan club interview: "I don't actually produce like normal producers do, as I get inside the music, and on the Annabella single I played all the instruments." Released as a single in April 1986, "Fever" was not a commercial success and failed to chart, as did the album of the same name, also released that year.

Release
"Fever" was released on 7" and 12" vinyl by RCA in the UK, across Europe, Australia and New Zealand. The B-side was "War Boys (Rough And Tough Mix)", which did not involve Lea. The 12" vinyl added an additional track, "War Boys (Dub Remix)". Both Lea productions from Lwin, "Fever" and "School's Out", would be included on her solo album Fever.

Promotion
A music video was filmed to promote the single, which largely featured Lwin performing the song in a diner. She also performed the song on the German TV show ExtraTour.