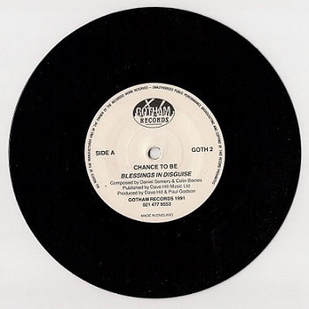 Chance to Be is the second and final single from Blessings in Disguise, which was a solo project created by Dave Hill. Released as a charity record by Gotham Records in late 1991, it failed to chart in the UK. The song was written by Daniel Somers and Colin Baines, and produced by Hill and Paul Godson.

Unlike Blessings in Disguise's 1989 debut single "Crying in the Rain", "Chance to Be" did not feature Noddy Holder, Bill Hunt or any of the other personnel involved in the debut single except Hill.

Background
On 26 March 1991, Hill attended the launch of a £2 million appeal to raise funds for the Queen Alexandra Technical College for the Blind in Birmingham. During the launch, a song called "A Chance to Be" was performed by blind and visually impaired children. The song had been written by two staff at the institute and Hill was so moved by the performance that he agreed to play on and produce a recording of the song.

Hill chose his own solo project name, Blessings in Disguise, as the artist name for the single. Shakatak's ex-vocalist Norma Lewis and local singer Michael Ryan were chosen as the lead vocalists on the song. Recording took place on 29 July 1991 at Rich Bitch Studios, where a photo session followed, which featured Hill, Lewis, Ryan and staff of the institute, along with the children who took part in recording backing vocals. The recording session took several hours and the song was later engineered and produced by Hill and Paul Godson.

Later in 1991, the single was released as a charity record to raise money for the college, who had funded the recording and manufacturing costs of the single themselves. The song did not make a chart appearance and it would be the last single to be released under Hill's Blessings in Disguise name. Lewis would later provide backing vocals for the Slade track "Red Hot", which was written by Hill and ex-Wizzard keyboardist Bill Hunt, and released in 1991 as the B-side to the single "Universe".

Release
"Chance to Be" was released on 7" vinyl by Gotham Records, an independent label from Birmingham, in the UK only. The B-side, "You're the Reason that I'm Strong", was written by Hill and also featured Lewis on lead vocal. As a charity record for a local cause, only a certain amount of copies were released at first, although the release soon became out-of-print. Both songs on the single were published by Dave Hill Music Ltd and have never been released elsewhere.

A quantity of pressings were made for distribution to record companies and radio stations with the hope that exposure and airplay would increase sales of the single. However, ithe end, there was not enough interest to push the project further. Upon its original release, with the permission of Hill and Gotham Records, a pressing of 300 copies were made available to be sold exclusively by the Slade International Fan Club. In 2013, Gotham Records owner Barry Tomes revealed that he still had copies of the single.

Cover versions
In 1995, a Norwegian 'police' band known as Blanc Messing began performing "You're the Reason that I'm Strong" live. The band mainly played to young audiences at youth clubs in the effort to "keep kids off the street, give solid anti-drug messages and save a lot of misery". The late Alan Barton, ex-Black Lace and Smokie, had provided Blanc Messing with a song and so band member John Ullenes had asked the Slade fan club editor Malcolm Skellington if there was a possibility that Hill would provide the band with a song. Skellington later asked Hill about it and he said: "I reckon they could do a version of "You’re the Reason that I’m Strong". When Blanc Messing visited England, they met Hill regarding the song and would first perform it back in Norway in April 1995. The band later recorded a studio version of the song in the spring of 2015.