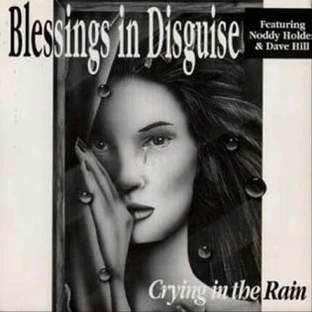 Crying in the Rain is the non-album debut single from Blessings in Disguise, which was a solo project created by Dave Hill. Released by Mooncrest Records on 27 November 1989, it failed to chart in the UK. The song, written by Howard Greenfield and Carole King, is a cover of the 1962 hit by the Everly Brothers. It features Noddy Holder on vocals and was produced by Hill and Bob Lamb.

Background
During the 1980s, Hill embarked on various musical projects outside of Slade with one of the earliest being in 1982, when Hill and Don Powell formed a group known as Life. Hill began collaborating with ex-Wizzard keyboardist Bill Hunt in the mid-1980s, who had been introduced to Hill through Life's guitarist Adrian Ingram. The same period saw Hill announce plans for a solo album, which would feature different singers on different tracks. Holder agreed to assist Hill with some his demos and during 1986-87, he recorded four tracks with Hill, one of which was the ballad "Wild Nights".

Following the release of Slade's 1987 album You Boyz Make Big Noize, the band decided to take an 18-month break and Hill continued working on his solo project. Through the Slade fan club, Hill mentioned various songs had been written or recorded, although they still remain unreleased to date. In a mid-1988 fan club interview, Hill commented: "I'm still working with my girl singer and I'm currently trying to get someone interested in the material. We then hope to make an album which could possibly include a track or two featuring Nod as a special guest. I've got one song already recorded by Nod, but we may do a couple more and then choose which ones to use. Nod's really doing it with me for the interest and to see how it sounds. It also helps to keep us both involved, and recording in the Midlands in very enjoyable."

"Crying in the Rain" was recorded during 1988 and finished by the beginning of 1989. The sessions also produced a version of Elvis Presley's "(Now and Then There's) A Fool Such as I", though it remains unreleased. "Crying in the Rain", along with "Wild Nights", were recorded with Holder on vocals, Hill on guitar, Hunt on keyboards, Craig Fenny on bass and Bob Lamb on drums. In early 1989, the Slade International Fan Club announced that the single would soon see a release, however the label and release date had yet to be confirmed. Holder described it as a "great version" and many letters were sent to the fan club from fans eager to know the release date.

Asked about the song in a mid-1989 interview, Hill responded: "You mean the Everly's song? Well that's what I'm here for really. We want an answer on it really, it got held up. How can I put this? Basically, Polydor have got it and they haven't made a decision. So really we feel that we've got to get it out this year, because like anything that you do, bearing in mind that I started it last year and finished it at the beginning of this year, we won't find out if it's a hit unless it comes out. It was just a thing we did for fun, Nod and I got together. There was no pressure to do it and we recorded one of my own songs, which is also good, and will probably be on the B-Side. "Crying in the Rain" came from a bit of a jam. We actually did an Elvis song as well, "A Fool Such As I", although its not as good as the Everly's song. Nod sings it really well. We've got the prospect of the band thing as well, which is also with Polydor, but we've got to get a decision, and I hope to see the record out within the next couple of months. And I'd like people to have it, it's a good piece of work, not highly produced or anything, it's just done on a 16 track up north, and it's not high tech - just done on feeling really. Unfortunately I can't give you an answer on a release date, so you'll just have to hang on a little longer."

The single was finally released in November 1989 through Mooncrest Records. Although Polydor had been interested in the song, they had requested that it was released as Slade. The label then wanted the whole band to re-record a version of it, however Holder refused as he had did not feel the existing version could be bettered. In a late 1989 interview on Sky by Day, Holder said of Blessings in Disguise: "Well that's Dave Hill's band. He's off doing a solo album at the moment, and he's using different singers on different tracks on the album. He's asked me to do about four tracks for him, singing, and one of the song's I did for him was "Crying in the Rain", the old Everly Brothers song, and he's bought that out as a single, and he's called his band Blessings in Disguise."

Hill told the Birmingham Sunday Mercury in 1989, "The new record came about when Nod and I were talking about the songs we grew up with. We made an arrangement and tested it out on a few people including my wife Janice. Everyone said they liked it so we went ahead and released it. It's a bit of a smoochy number, more mature than a Slade record. The B-side is more like Slade. That's called 'Wild Nights' and is a thank you to all the fans for the great nights we've had on tour."

Despite the promotion Holder and Hill underwent for the single, "Crying in the Rain" failed to enter the UK Top 100. Although local BBC/IBA stations gave the song good airplay, the only play on Radio 1 was on the Newsbeat programme of 9 December. In addition, distribution issues were also a major issue and many fans sent letters to the Slade fan club, complaining about the difficulty of obtaining a copy of the single. Perhaps due to the lack of commercial success, Hill's proposed solo album was never released and only one further single followed using the Blessing in Disguise name, "Chance to Be", which did not feature Holder or even Hunt.

Although "Crying in the Rain" did not become a hit, it played a part in helping interest Polydor into releasing a new Slade compilation. Wall of Hits, would be released in 1991 and featured the two new singles "Radio Wall of Sound" and "Universe". Recalling the single in his biography Who's Crazee Now?, Holder said: "Both Jim and Dave had been recording and releasing their own records. I had even sung on one of Dave's records with his new band. I did it as a favour because we were still mates. It was a cover of an Everly Brothers song called "Crying in the Rain" and it was this that had prompted Polydor's interest. The four of us decided to record two new songs for the Greatest Hits album."

In 1990, the Norwegian pop band a-ha would have a big European hit with their version of the song. Later in a 1999 interview with Stoke Mandeville Hospital Radio, Hunt said: "We did a cover of the Everly Brothers song "Crying in the Rain". Yes, Nod sang that and it went down well. It was actually brought out as a single before the a-ha one. A-ha had a hit with it shortly afterwards but whether they'd pinched the idea from us doing it or just found it themselves, I don't know but they had a lot of success with that single."

Release
"Crying in the Reain" was released on 7" vinyl by Mooncrest Records in the UK only. It was marketed by Trojan Sales Ltd. The sleeve used the artist name: "Blessings in Disguise featuring Noddy Holder & Dave Hill". The B-side, "Wild Nights", was written by Hill and Hunt. The son was later revived by Hill for the live set-list of Slade II during the early 1990s. It was soon re-recorded by the band and included on the 1995 UK release of their 1994 album Keep on Rockin'.

Promotion
On 3 December 1989, Holder and Hill appeared on the music panel show Juke Box Jury, hosted by Jools Holland. Both Holder and Hill were mystery guests on the show and initially hid "behind the wall" in a backroom. As the last show of the present series, "Crying in the Rain" was reviewed by the Pop Panel, which included Bruno Brookes, T'Pau vocalist Carol Decker, American singer Jermaine Stewart and comedian Jeremy Hardy. Holland revealed the odds of the record being a hit were 33 to 1. Decker stated: "Very nice song, very singable song, but that's down virtually the song. I think it's a really bland and pointless copy of it." Bruno Brooks believed it would be a minor hit and commented: "I hope this will be a hit for them, and it's a nice song as well." Stewart said: "I think it's the best song that we've heard today." Overall, all members of the panel, aside from Decker, believed the song would be a hit.

On 10 January 1990, Holder and Hill appeared at the open-air Black Country Living Museum to record a video for Central TV News. This included performing a segment of "Crying in the Rain", followed by an interview, and then a segment of "Wild Nights". The recording was broadcast on 11 January.  The pair starts performing "Crying in the Rain" on a bridge, before walking along an empty street, and then entering the Bottle & Glass Inn. During the short interview on the song inside the inn, Holder spoke of the song's nature, revealing: "That was our romantic side - we can be [romantic] if we want to - there's a soft spot inside everybody. You'll have to blame David for this - it was his idea - "Blessings in Disguise"." Hill added: "Well that's right, I'm mean actually, to put the record straight, this is not a Slade record. But I think Nod can sing this sort of stuff, you see, and it's just an idea. He's a guest on my thing, you see. It's a group called Blessings in Disguise, which is my project. It's an album project, which I'm using different singers on, and so I asked Nod if he'd like to do some different stuff. I think it suited this track, you see, and we had a chat." The final segment features "Wild Nights", where Holder and Hill perform the song as they leave the pub, pass a small crowd, and head down the street.