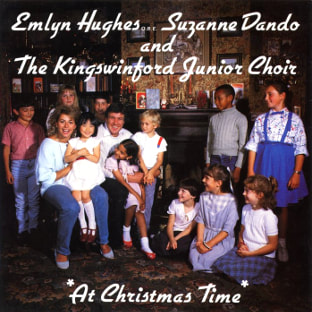 At Christmas Time is a song by Emlyn Hughes (O.B.E.), Suzanne Dando and the Kingswinford Junior Choir, which was released as a charity single on 18 November 1985. It was written by Barry Hipkiss, and produced by Noddy Holder and Roger Allen.

Background
"At Christmas Time" was recorded as a charity single, with its royalties donated to the National Society for the Prevention of Cruelty to Children (NSPCC). The vocals and spoken passages were performed by former England footballer Emlyn Hughes and former Olympic gymnast and television broadcaster Suzanne Dando. Children of the Kingswinford Junior Choir provided the choir backing. The song's writer and arranger, Barry Hipkiss, was a teacher at Summerhill School, Kingswinford.

The song was recorded at the Different Disguises Studios, Cradley Heath, West Midlands. Noddy Holder produced the single alongside Roger Allen, who briefly managed Slade in the late 1960s when they were known as the 'N Betweens and Ambrose Slade.

Holder became involved in co-producing the single after he was approached by Allen. By that time, Allen had already organised the involvement of Hughes, Dando, Hipkiss and the NSPCC with the project. Holder's involvement was partly influenced from his reading of the British newspaper coverage on child cruelty at the time, along with reports that many charities, including children's charities, were suffering a decrease in donations due to the success of Band Aid and Live Aid. The single, released in November 1985, failed to generate significant airplay on UK radio and did not make an appearance on the UK Singles Chart.

In a 1985 TV interview, Hughes said: "I've known Roger for ages and ages. He rang me up and asked me if I'd be interested in doing this Christmas record. I said 'I'm not a singer, anything but!' But we got involved in the record. The record's a good little tune actually. It's a pity that more of the major stations haven't played it more often because all the proceeds go to NSPCC."

Release
"At Christmas Time" was released on 7-inch vinyl by Mike Hamblett's West Midlands-based Sub Zero Music (Sub Zero Records) in the UK. It was distributed by P.R.T. The B-side is an instrumental version of "At Christmas Time". The front sleeve's photograph was taken by Frank Powers at a location courtesy of Banks's Breweries.

In 1996, the song was included on the Cherry Red CD compilation album You'll Never Walk Alone - Liverpool FC & Supporters - 24 Anfield Anthems, where it was credited to Emyln Hughes with Suzanne Dando and kids. In 1995, it appeared on another various artists compilation, Football Crazy 2, which was released in Europe on the Emporio label.