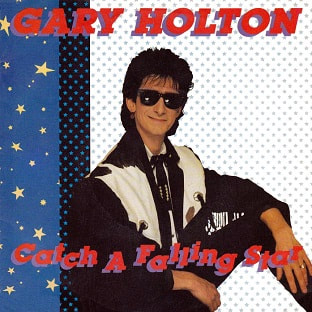 Catch a Falling Star is a single from the British singer-songwriter, musician and actor Gary Holton, released by Magnet in November 1984. A cover of the 1957 Perry Como hit, "Catch a Falling Star" was written by Paul Vance and Lee Pockriss, with Holton's version being produced by Jim Lea. It was released as a non-album single and was later included on Holton's posthumous self-titled debut album in 1986.

Background
In 1984, Holton secured a deal with Magnet Records and soon released the UK-only single "Holiday Romance", written by Phil Bird and produced by Steve Jenkins. In November 1984, the follow-up single "Catch a Falling Star" was released which, like its predecessor, failed to make an impact on the UK charts.

Lea produced and performed on Holton's version of "Catch a Falling Star". Lea played all instruments (guitars, bass and keyboards) except for drums which were played by Jeff Seopardi. The song was recorded at Portland Studios and mixed at Workhouse Studios in London. The recording session also produced an additional track, "That's How the Story Goes", which again saw Lea produce and play all instruments except drums.

Speaking to Mick Wall of Kerrang! in late 1984, Lea said: "What we're doing together are two singles. If I tell you that one of them is going to be "Catch a Falling Star" you'll get something of the idea. It's not a Perry Como job in nice comfy cardigans or anything, it's definitely rock. I play all the instruments with a drummer, and he does the singing."

Holton died from an overdose of morphine combined with alcohol in October 1985 and the following year saw his posthumous self-titled debut album released on an independent label, Gaza Records. "Catch a Falling Star" was included, as was the previously unreleased "That's How the Story Goes".

Release
"Catch a Falling Star" was released on 7" and 12" vinyl by Magnet in the UK and Germany. The B-side was "Angel", which did not involve Lea. The 12" vinyl featured extended versions of both tracks. A special star-shaped 7" picture disc was also issued in the UK.