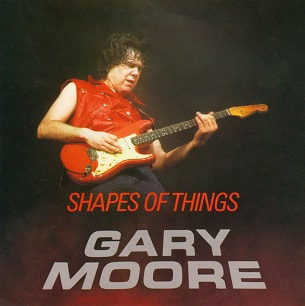 Shapes of Things is a song from the Irish guitarist and singer-songwriter Gary Moore, released as the second single from his fourth solo studio album Victims of the Future in March 1984. A cover of the 1966 song by The Yardbirds, it was written by Paul Samwell-Smith, Keith Relf and Jim McCarty, with Moore's version produced by Jeff Glixman. Noddy Holder provided backing vocals on the track.

Background
Victims of the Future marked a continuation of the hard rock/heavy metal direction Moore had embarked on for his 1982 album Corridors of Power. The first single from Victims of the Future, "Hold on to Love", was released in December 1983 and reached No. 65 in the UK. The album followed in January 1984 and proved to be Moore's most successful at that time, peaking at No. 12. As the album began to drop down the UK Top 100, "Shapes of Things" was released in March as the album's second single. It reached No. 77 and remained on the charts for three weeks.

In a 1984 interview with Steve Newton, Moore revealed of the song: "...apart from the fact that I liked the song and the guitar aspect of it, the lyrical thing appealed to me as well because it fitted in with the theme of the record, being about warfare and all that kinda thing." In a 1984 interview with Steve Wosahla for the Messenger-Press, Moore commented: "It may not be talking about a nuclear war but it's still relevant today." He later told Dave Ling of Classic Rock in 2006 that the song was "very reflective of that [80's] era".

Holder was approached and agreed to provided backing vocals on Moore's version. Moore told Newton: "Noddy’s a bit of an expert at that kind of chanting vocal thing because Slade have used that effect a lot. And we kinda knew Noddy through a few mutual acquaintances, so he came in to help out." The song was recorded and mixed at the Townhouse in Shepherd's Bush during October-November 1983.

Release
"Shapes of Things" was released on 7" by Ten Records in the UK, Ireland, Europe and Australia. The B-side, "Blinder", was written by Craig Gruber and did not feature Holder.  The 12" version of the single, issued in the UK and Europe, included an additional track, a near thirteen minute interview with Moore by Alan Freeman, reproduced with permission of Capital Radio. In the UK, a picture disc version of the 7" release was issued, depicting a nuclear explosion. Another UK 7" release contained a new version of "Shapes of Things" as the A-side, remixed by Chris Tsangarides, and included a free "Gary Moore" patch.

Promotion
A music video was filmed at the Alexandra Palace in London to promote the single.