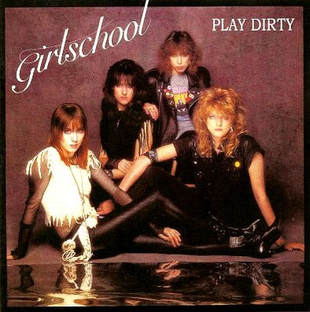 Play Dirty is the fourth studio album by the British heavy metal band Girlschool, released on 31 October 1983 by Bronze Records (and in November by Mercury Records in the US). It was produced by Noddy Holder and Jim Lea, and reached No. 66 in the UK charts.

In 2005, Sanctuary Records re-issued the album on CD, including songs from the EP 1-2-3-4 Rock and Roll and other compilations as bonus tracks.

Background
Following the release of 1981's Till Deaf Do Us Part, Slade returned to the studio in 1982 to record the follow-up, The Amazing Kamikaze Syndrome. Work on the album continued into early 1983, however the band's label, RCA, felt the recorded tracks lacked chart potential, prompting them to suggest the band use an outside producer. Prior to the hiring of John Punter in late summer and the beginning of new recording sessions, Holder and Lea were approached by Girlschool's management, requesting they produce the band's next single. An agreement was made in May 1983 and recording was carried out in June, with one of the two tracks recorded being a version of Slade's upcoming album track "High and Dry".

Although Girlschool were due to record further material for their next album with Quiet Riot producer Spencer Proffer in Los Angeles, the band were pleased with the results of their sessions with Holder and Lea, leading them to be hired to produce the new album in its entirety. Recording was carried out in London and completed in August.

Play Dirty was released in October 1983 (and November in the United States), but proved to be a commercial disappointment for the band, despite the conscious effort to produce a more polished sound aimed at achieving a breakthrough in North America. It peaked at No. 66 in the UK, becoming the band's first album not to reach the Top 40, while in the US, it reached No. 46 on Billboard's Rock Albums chart. October also saw the release of the album's first single, a cover of the 1973 T. Rex hit "20th Century Boy", however it failed to chart. In January 1984, "Burning in the Heat", a cover of the 1977 Slade song, was also released to commercial failure. In the US, the album's title track was issued as a promotional 12" single.

Following the album's release, the band embarked on a 1983-84 tour in the United States, during which time lead guitarist and vocalist Kelly Johnson left the band. Johnson had already considered leaving Girlschool prior to the recording of Play Dirty, but the opportunity of working with Holder and Lea convinced her to remain a member. With her departure, Bronze Records opted not to extend their existing recording contract with the band, however Girlschool went on to continue as a five-piece, releasing their next studio album, Running Wild, through Mercury in 1985.

Recollections
Speaking to Sounds in December 1983, Holder said of working with the band: "Their manager approached me and Jim in the first place and asked us if we'd produce a couple of tracks with the girls for their next single. So we did that and they liked the results so we did the whole album. It was really hard work; they're terrors! They're just like the Bash Street Kids really. Discipline went to the wall but the end product was good and that's all that matters."

Holder elaborated to Kerrang!: "I think [the album] turned out really well, especially after the problems we had. For example, they were so difficult to motivate. When the girls got down to playing, they were great, particularly Kelly who is an amazing guitarist. But for some reason, they couldn't perform at their best unless they really wanted to. It wasn't due to any laziness, just an inability to self-motivate. So, Jim and I had to capture them at just the right moments. On top of this, they were always arriving late and then slinking off to the pub. In the end we were forced to lock them in the studio to ensure the deadline for delivery of the final product was met. The girls actually went into the studio to record the album with one song fully written, one half-written and a collection of partially thought-out ideas. We had to help them get the numbers together. I was amazed how much time they wasted in the studio just writing. With the year gap between Screaming Blue Murder and Play Dirty I expected 'em to have ten strong songs fully written and arranged. In the event, a lot of expensive recording time was wasted on composing." He concluded: "But, let me say this. Girlschool are potentially a great band and this album is very good. Certainly, everyone around them – management, record company - are convinced it'll sell exceptionally well. I just hope they're right."

Lea told Record Mirror in December 1983: "It was fun working with Girlschool although they were pretty lively and a real handful. It seems to me that a lot of bands rely on the trendy producers who never actually play an instrument. We were able to get really close to them and help them out if they were stuck for a line. We've also made them sound more melodic than they've ever done before."

In his 1999 biography Who's Crazee Now?, Holder recalled: "It was a good record, but a nightmare to make. The girls just turned up when they felt like it and even then sometimes they'd disappear without warning to go shopping. We had to get a car to pick them up in the morning, then literally lock them in the studio for the rest of the day. They were great fun though."

Speaking to Get Ready to Rock! in 2005, Girlschool drummer Denise Dufort rated the album as her favourite of all the band's career. She considered the album to have "a more mature sound to it", adding: "I think it sounds a bit like Def Leppard". Commenting on the band's choice to work with Holder and Lea over Proffer, vocalist and guitarist Kim McAuliffe recalled to Planet Rock in 2017: "'Cause we're British! And we wanted to work with our British heroes. Shows how stupid we are, but we had a brilliant time".