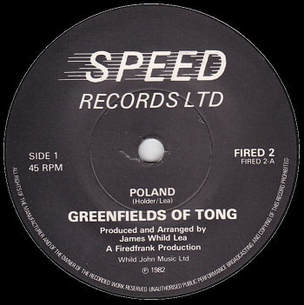 Poland is a non-album solo single from Jim Lea under the pseudonym Greenfields of Tong. Released by Speed Records on 14 May 1982, it failed to make a chart appearance in the UK. The song was written by Noddy Holder and Jim Lea, and produced by Lea.

Background
"Poland" was recorded in 1979-80 by Lea as part of his music project the Dummies, which he formed with his brother Frank in 1979. With Slade suffering from a period of low popularity and resistance from radio, Jim wanted to find out whether it was his and Noddy Holder's songwriting or simply a reluctance from DJs to play new Slade material. The pair formed Cheapskate Records, which Frank wanted to use to prove that any independent label, with the right promotion and distribution, could release a hit single. The Dummies produced three singles between 1979 and 1981, and although they all failed to chart, they did gain radio play. While some tracks were recorded in 1979, much of the Dummies material was recorded in 1980 and it is likely "Poland" was recorded that year.

However, "Poland" was not released until May 1982, when it was released on Speed Records under the pseudonym Greenfields of Tong. The single failed to chart. The song itself is a reworking of the Slade song "Lemme Love into Ya", an album track from their 1979 album Return to Base. "Poland" features new lyrics and is keyboard-dominated as opposed to the guitar-based original.

The Greenfields of Tong name referred to a small countryside village named Tong, located just outside Wolverhampton. In a 1999 Slade International Fan Club newsletter, Frank Lea revealed: "Up home there is a village called Tong and James and myself used to drive through it to rehearsals. Tong is in the countryside – hence Greenfields of Tong. The name was just a bit of fun at the time."

Release
"Poland" was released on 7" vinyl by Speed Records, a label run by Frank Lea, in the UK only. The B-side was an instrumental version of "Poland". This instrumental version would later reappear on two further releases. In 1983, it appeared as the B-side to Sue Scadding's single "Simple Love", which was written by Holder and Lea, and produced by Lea. It also appeared as the B-side to Lea's own 1985 solo single "Citizen Kane". Both the main and instrumental versions of the song were later included on the 1992 album A Day in the Life of the Dummies, which gathered all of The Dummies recordings.