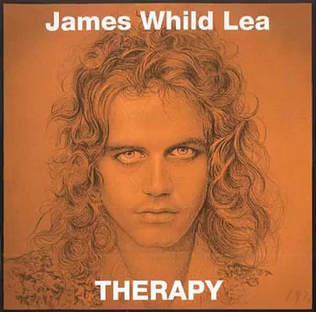 Therapy is the debut solo studio album by Jim Lea, released independently in 2007 on Jim Jam Records. The album was later re-issued in 2016 by Wienerworld.

Background
After the disbanding of Slade in 1992, Lea entered the property business in 1993 and went on to study psychotherapy in 1997, although he did not take it up as a career. In 1998, he began writing and recording material again. However, beyond the release of the "I'll Be John, You Be Yoko" single in 2000, the material would remain unreleased as Lea was unsure of how to get the material to the public. In 2000, Lea put his music plans on hold to care for his father, who died in 2002. That year, Lea performed a charity show "Jim Jam" at the Robin 2 club in Bilston and afterwards, in 2003, he decided to record a solo album. The first demos for the album had been made around the time of his father's death.

Titled Therapy, Lea arranged a meeting with Slade's former record label Polydor, however he decided to cancel after he felt that the label would not understand the project. Wishing to avoid conventional marketing strategies and the pressure to tour to promote the album, Lea decided to release Therapy independently in 2007. On his official website, Lea stated: "I was never a naturally public figure, but now I am re-emerging as an artist in my own right, mostly free from the restrictions of the industry. There will be more to come soon, but for now make the journey, step on the train, and get some Therapy. The reason I have adopted this website approach, for now at least, is that every time I have spoken to a record company about putting my music out there, it always seems to be inexorably linked with touring, which is a great consumer of time, energy and of course money, in other words, a great obstacle."

Release
Therapy was originally released in 2007 as a 13-track CD and digital release on Jim Jam Records. Although no singles were released from the album, the opening track "Heaven Can Wait" appeared on the promotional CD Now Hear This! 54, distributed free with Word magazine. In 2009, the album was released as a double CD to include a recording of the Robin 2 gig on the second disc.

In 2016, the album was re-issued as a double CD by Wienerworld. In addition to the altered colour of the sleeve, the re-issue featured three previously unreleased bonus tracks: "21st Century Thing?", "Thank God It's Friday Right Now" and "Am I the Greatest Now?" The 16-page booklet contained new liner notes from Lea, as well as memories of the Robin 2 gig by owner Mike Hamblett. A vinyl edition of Therapy was also released by Wienerworld in November 2016. It featured an additional three bonus tracks, two of which were previously unreleased: "Misty Morning Light" and "Dare to Be Great". The other bonus track, "I'll Be John, You Be Yoko" was released in 2000 as a single under the name "Whild".

Critical reception
Original release
2016 re-issue
Song information
Robin 2 Live
In 2002, Lea performed live for charity at the Robin 2 venue in Bilston. While most of the set-list contained covers, Lea performed two original songs that would appear on Therapy; "Great Big Family" and "Over the Moon", with the latter being re-titled "Go Out in Style". The entire Robin 2 gig was originally released in 2007 as a download on Lea's official site. Later in 2009, the gig was added as a bonus disc on a double CD edition of "Therapy". Although it contained the entire set-list of his main performance, it did not feature the encore tracks: "Get Down and Get with It", "Teddy Bears Picnic", "Johnny B. Goode", "Gudbuy T'Jane", "Twist and Shout", and "Purple Haze". During the concert, Lea performed covers of Slade hits "Cum On Feel the Noize", "Mama Weer All Crazee Now", "Far Far Away", "Gudbuy T'Jane" and "Get Down and Get with It".