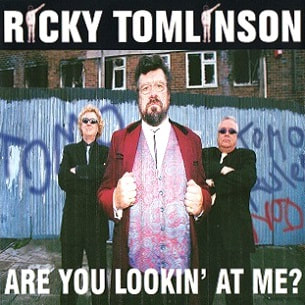 Are You Lookin' at Me? is a song from the British actor and comedian Ricky Tomlinson, released as the only single from his debut album Music My Arse by All Around The World Productions Ltd/Fubar Records on 22 October 2001. It reached No. 28 in the UK and remained in the charts for three weeks. A cover of the 1998 song by the Irish folk rock group The Popes, it was written by The Popes and produced by Phil Coxon. Noddy Holder provided additional vocals on the track and made an appearance in the song's music video.

Background
Tomlinson's version of The Popes' "Are You Lookin' at Me" was the idea of Phil Coxon, who produced and played guitar and keyboards on the track. After approaching the comedian with his idea, Tomlinson agreed to sing the track on the condition that a professional vocalist was involved to provide support and direction. Tomlinson, opting to contact Holder, told Parkinson in 2001: "I said I will [sing] if I can get someone to sort of give me a little bit of support, so I got in touch with Noddy Holder. We actually sent him a fax saying: "Dear Noddy, we're making this record, will you come down and do the backing vocals?" And he sent a letter back saying: "What are you offering?" so we sent another fax saying "£12.50 and a week in my caravan in Benidorm". And we've actually signed the contact!"

"Are You Lookin' at Me" was recorded at Parr Street Studios in Liverpool. It was released in October 2001 and reached No. 28 on the UK Singles Chart. In his 2014 book The World According to Noddy, Holder spoke of his involvement with the single: "Ricky talked me into singing along with him on a record he was making called "Are You Lookin' at Me?" He drew up a contract paying me an old shilling, a Val Doonican album and a week in his caravan. I'm still waiting for the week in his caravan. We had a riotous time doing the record and video."

In 2006, Tomlinson would release another single, "Christmas My A*se!", which reached No. 25 in the UK. In the opening spoken section of the song, Tomlinson spoke of Holder and indirectly referenced "Merry Xmas Everybody": "Here we go again, same old rip off, same old tunes on the telly, same old faces. That Noddy Holder, he'd put years on ya! Why anyone listens to him I don't know, he's not even as good looking as me! Have you seen the hair on him? No wonder the barbers are starving where he comes from. I tell you what Noddy Holder, you've got a challenge on your hand here, I've written this song especially for you, you miserable old sod!"

Release
"Are You Lookin' at Me" was released on CD by All Around The World Productions Ltd in the UK under exclusive license from Fubar Records. Two additional tracks were included, but did not feature Holder: "Pogue Mahone", written by Coxon and Tomlinson, and "Dirty Old Town", a cover of the song written by Ewan MacColl and covered by the Pogues. The single was distributed by Absolute Marking and Distribution (AMD) and Universal.

Promotion
A music video was filmed to promote the single, which featured appearances from Holder, Geoffrey Hughes and Michael Starke. It was shot in Liverpool and produced by Colin McKeown. The video was included on the CD single.

Tomlinson, with Holder and Sweeney and a backing band, also made an appearance on BBC One chat show Parkinson to perform the song live. It was broadcast on 20 October.