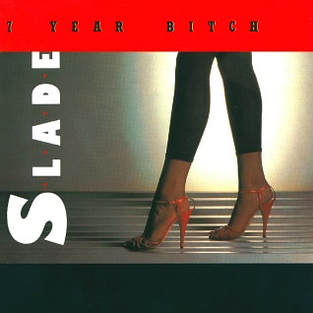 7 Year Bitch is Slade's second single from their twelfth studio album Rogues Gallery. Released by RCA on 18 January 1985, it reached No. 60 in the UK and remained in the charts for three weeks. The song was written by Noddy Holder and Jim Lea, and produced by John Punter.

Background
Having agreed to take a break from touring but still continue to record new material, the band started recording Rogues Gallery in 1984. In November that year, the lead single, "All Join Hands", was released and reached No. 15 in the UK. In January 1985, "7 Year Bitch" was released as the follow-up single. Both the band and RCA expected the song to be a hit, however the single stalled at No. 60 after it received resistance from a number of UK broadcasters, largely due to the song's title. The band felt the lack of airplay was unfair, particularly as one past hit single to use the term "Bitch" was Elton John's 1974 song "The Bitch is Back". In 1998, Holder commented of the song: "That was a hit record, but we got a bit of a backlash".

Release
"7 Year Bitch" was released on 7" and 12" vinyl by RCA Records in the UK, Germany and Japan.The B-side, "Leave Them Girls Alone", was exclusive to the single and would later appear on the band's 2007 compilation B-Sides. On the 12" single, an extended version of "7 Year Bitch" was featured as the A-Side, and a second B-side, a live version of "We'll Bring the House Down" was also included, taken from the 1982 live album Slade on Stage.

Promotion
In 1985, the band performed the song on Saturday Live. It was also performed on German TV, on the shows Na Sowas!, Die Spielbude and Pro Koncert. In Norway, the song was performed on the NRK network at the official opening of the Scandic Hotel in Sandvika, Oslo.

Music video
A music video was filmed to promote the single, which was directed by Phillip Davey and shot at Ewert Studios in London. Slade's only video to feature sexual connotations, it featured the band performing the song in a large orange tent, with a group of women shown in various shots. Another segment of the video showed Slade dressed in convicts outfits, (a play on the Seven Year Itch aspect of the song), while the final scene had Slade sit down for a tea party with the women. During filming, Davey suggested the band and the women have a pie fight. Telling the band he would tell the group when to start, he secretly told the women to start whenever they like so that the band were hit in the face first. Recalling the video in 1986, Lea remembered the fight was "in good humour", but that it was quite rough. As a result, both Lea and Dave Hill suffered some cuts and some frames in the video show Lea's face covered in blood.

In March 1985, Music & Media listed the video as being a "video hit" across the continent. It received heavy play on Sky Channel's Sky-Fi Music Show and Music Box.

Appearing on Music Box's First Sight show in 1985, Holder said of the video: "[It's] a lot more colourful [than past Slade videos], we really wanted a lot of colour. It was the director's idea really to have this sort of Alice in Wonderland type set. I think it come off good." He added: "In our videos we like to get our personalities across more than having a big extravaganza thing. As long the humour of the band comes across, we don't care what goes on round about, 'cause it's all icing on the cake."

Formats
7" single 12" single
Personnel
Slade
Additional personnel
Cover versions
In 1989, Lea revealed in a Slade fan club interview that he had recorded his own version of "7 Year Bitch", although his version remains unreleased to date. He stated that his version was "not like Slade's version."