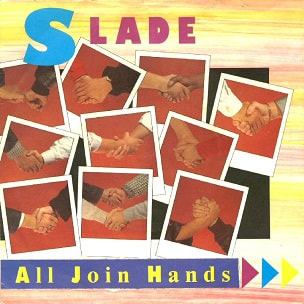 All Join Hands is Slade's first single from their twelfth studio album Rogues Gallery. Released by RCA on 9 November 1984, it reached No. 15 in the UK and remained in the charts for ten weeks. The song was written by Noddy Holder and Jim Lea, and produced by John Punter.

Background
After the band's 1984 breakthrough in America, the band decided to stop touring but continue to record new material. That year the band began recording Rogues Gallery, with "All Join Hands" being recorded at Angel Studios with producer John Punter. The song, selected as the album's lead single, was released in November 1984 to coincide with the Christmas market.

The song reached No. 15 in the UK and achieved much airplay in the UK and across Europe. In the first week of December, the song ranked at No. 10 on a UK Radio Airplay Report, which listed the top twenty most played records on BBC stations, Capital Radio, Radio London and major independents. Despite the song's success, it would be Slade's last UK Top 40 hit for seven years. In Europe, the first week of December saw the song listed as a "hot radio add" on EMR's Eurotipsheet.

"All Join Hands" is a similarly-styled anthem to the band's 1983 hit "My Oh My". In a 1984 interview with Record Mirror, Lea said: "It's another anthem. I come up with these on my way down to the chip shop. It just popped into my head while I was walking down the street. I don't have to sit down at a piano or lock myself in a cottage somewhere. I've got all the tunes in my head but Nod's my bounce, my partner. We could write over the phone by now."

Release
"All Join Hands" was released on 7" and 12" vinyl by RCA Records in the UK, Ireland, Germany, the Netherlands, Portugal, Spain, El Salvador and Australia. The B-side, "Here's To...", would later appear on the band's 1985 studio/compilation album Crackers.

On the 12" single, an extended version of "All Join Hands" was featured as the A-side. A limited edition 12" vinyl was also released in the UK, featuring two additional tracks; "My Oh My" and "Merry Xmas Everybody (Live & Kickin')". The latter track had previously appeared as the B-side to the band's 1982 single "(And Now the Waltz) C'est La Vie".

Promotion
In the UK, the band performed the song on the TV shows Top of the Pops, Razamatazz and Saturday Superstore. On one of the Top of the Pops performances, Holder sported two paper cut-out hands on sticks halfway into the performance, while both Lea and Dave Hill had paper cut-out hands stuck to their guitars. In Germany, the band performed the song on the ZDF show Thommys Pop Show.

Music video
A music video was filmed to promote the single, which was directed by Phillip Davey and shot at Ewert Studios in London. The video featured John Otway of Otway & Wild Willy Barrett Really Free fame as the pianist. The video opens with a piano concerto played to a small seated audience in a posh hall. Holder soon enters the room, much to the horror of the audience, while Lea pushes Otway off the piano and begins to play. Holder begins singing the opening verse of "All Join Hands" and soon Hill appears to play the guitar solo on top of the piano. The stage lights up and Don Powell appears on the drums. As the show has now transformed into a Slade gig, the audience are seen to be won over as they sway from side to side to the song. Eventually, they rush the stage after pulling off their evening wear, revealing Slade T-shirts.

The video received widespread play across European programmes. In December 1984, Music & Media listed the video as one being "well aired" across the continent. It received heavy play on the Sky Channel's Sky-Fi Music Show.