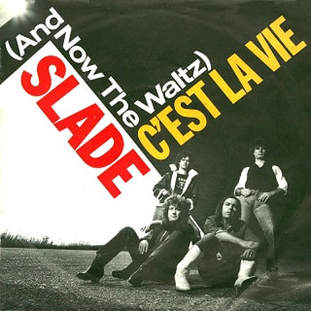 (And Now the Waltz) C'est La Vie is Slade's first single from their eleventh studio album The Amazing Kamikaze Syndrome. Released by RCA on 19 November 1982, it reached No. 50 in the UK and remained in the charts for seven weeks. The song was written by Noddy Holder and Jim Lea, and produced by Lea.

Background
Having signed a record deal with RCA in 1981, the band started recording their second studio album for the label in 1982. In November that year, the album's first single, "(And Now the Waltz) C'est La Vie", was released, a month before the release of the live album Slade on Stage. Attempting to appeal to the Christmas market, the single reached No. 50 in the UK. As the song had not been the big hit that both the band and RCA hoped for, the band's new album The Amazing Kamikaze Syndrome would not be released until December 1983. In early 1983, RCA told the band that the album lacked potential chart hits and in the effort to amend that, RCA hired producer John Punter to work on two tracks "My Oh My" and "Run Runaway", both of which would go on to become big hits in 1983-84. "(And Now the Waltz) C'est La Vie" fared better in Poland, reaching No. 2 there in January 1983, while also peaking at No. 29 on Radio Luxembourg's chart.

"(And Now the Waltz) C'est La Vie" is a ballad, described by Holder as a "sentimental love song". In a 1983 interview with Sounds, Lea said of the song: "When we wrote "C'est La Vie", we thought it was a ballad but when Dave Lee Travis played it, he said "That's Slade and now for a ballad" and put Lionel Ritchie on and then we realised ours wasn't a ballad at all. It came over like four idiots trying to tear their way out of the speakers." Speaking of the time between the band's 1981 hit "Lock Up Your Daughters" and "My Oh My", Holder told Sounds in 1983: "It may have looked as if we disappeared after "Lock Up Your Daughters" but we released a single at the end of last year - "C'est La Vie" - which looked as if it was going to be quite a big hit but unfortunately it didn't get much above #50 in the charts. In addition to that we've done three nationwide tours and they all sold out."

In November 2005, Holder appeared on his regular TV-reviewing slot on the BBC Radio 2 show The Radcliffe and Maconie Show. Asked to choose a track from the band's new compilation album The Very Best of Slade, Holder chose "(And Now the Waltz) C'est La Vie" much to Radcliffe's surprise. Holder said he felt the track, although not one of Slade's best known singles, showed off his voice really well.

Release
"(And Now the Waltz) C'est La Vie" was released on 7" vinyl by RCA Records in the UK, Ireland, Australia, Germany and the Netherlands. The B-side, "Merry Xmas Everybody (Live & Kickin')", was exclusive to the single and would later appear on the band's 1985 studio/compilation album Crackers. On the single, it was credited to "Slade & The Assorted Nutters Choir". The artwork for the single was the same as used for Slade on Stage.

The single's front sleeve photograph was shot by Gered Mankowitz underneath a bridge on a section of the M25 motorway prior to its opening.

Promotion
No music video was filmed to promote the single. In the UK, the band performed the song on the ITV children's music show Razzmatazz. In December, Slade embarked on a UK tour, which promoted the single and the Slade on Stage album.