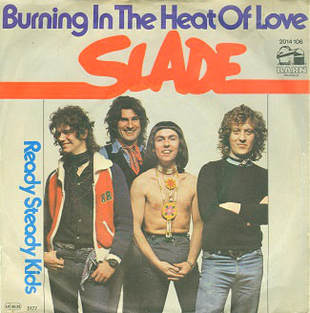 Burning in the Heat of Love is a non-album single, released by Barn Records on 15 April 1977. It failed to make an appearance on the UK Singles Chart. The song was written by Noddy Holder and Jim Lea, and produced by Chas Chandler.

Release
"Burning in the Heat of Love" was released on 7" vinyl by Barn Records in the UK, France, Germany, Belgium and Italy. The B-side, "Ready Steady Kids", was exclusive to the single and would later appear on the band's 2007 compilation B-Sides.

Promotion
In Germany, the band performed the song on the TV show Szene 77. The song also appeared in the band's set-list around the time, and a live version would later appear on the band's 1978 live album Slade Alive, Vol. 2.