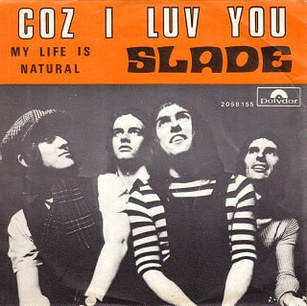 Coz I Luv You is a non-album single, released by Polydor on 8 October 1971. It reached No. 1 in the UK, giving the band their first number one single, and remained in the charts for fifteen weeks. In the United States, it was released in December 1971 by Cotillion, but did not chart. The song was written by Noddy Holder and Jim Lea, and produced by Chas Chandler.

Background
After the commercial failure of their 1970 album Play It Loud, Slade and their manager Chas Chandler began considering the band's next career move. Deciding to drop the skinhead image they had adopted in 1969, the band and Chandler felt that the best way to make a commercial breakthrough would be to capture the band's strong reputation as a live act onto record. The chosen song was Bobby Marchan's "Get Down and Get with It", which the band frequently played live, always receiving a great response from the audience. Released in May 1971, the song successfully broke the band into the UK and Europe, reaching No. 16 in the UK.

Considerations were then made over what to record for the next single. At one point the popular stage number "Hear Me Calling" was recorded as the next potential single, while the band also received demos from various songwriters including Randy Newman. Holder told Record Mirror in July 1971: "We've played through all of them, but we haven't found anything yet that we really like. We're looking for a follow-up single, but we want something very heavy for that." However, attention turned to writing an original song after Chandler insisted the band write one as the next single release.

One evening, Lea unexpectedly turned up Holder's home with his violin. He had an idea for a song after hearing "Nine By Nine" by the John Dummer Blues Band. He suggested that he and Holder write a song which had a Django Reinhardt/Stephan Grapelli "Hot Club"-influence. The pair wrote the song in half an hour and began the successful songwriting partnership of Holder/Lea, which would go on to write the bulk of Slade's material. The following day, the band played the song acoustically to Chandler, who responded: "I think you've written your first hit record. In fact, I think you've written your first No. 1."

Immediately booking the band into Olympic Studios in Barnes, the song was recorded in two days. Although Chandler liked the song, the band were less enthusiastic as they believed it to be too poppy and weak-sounding in comparison to "Get Down and Get with It". In the effort to make the record more Slade-like, the band added foot-stomping and hand-clapping to it. Furthermore, the band thought the original title, "Because I Love You", did not suit the band's image or sound. Holder then suggested spelling the title to reflect their Black County dialect. The title then became "Coz I Luv You". The misspelling of the title would become one of the band's trademarks. Released in October 1971, "Coz I Luv You" reached No. 1 in the UK and was also a hit across Europe and elsewhere.  According to Holder's 1999 biography Who's Crazee Now?, the single sold half a million copies in only two weeks.

In a 1980 interview with Sounds, Lea said of the song: "I didn't even like some of those old ones. We all hated "Gudbye T'Jane" when we made it. The same for our second single, "Coz I Luv You". It was namby-pamby to us, a throwaway for an album. It shot to number one in two weeks and we thought, "What a pile of shit!" It was so wet."

Later in a 1984 interview with Record Mirror, Lea said: "That was the time when I wrote mainly with Don and Dave wrote with Nod. Nod and I were really into Stephan Grappelli and Django Reinhardt, the violin and stuff, so one afternoon I went over to Nod's on his council estate where he lived with his mum and dad and I said "Hey Nod, why don't we write a song?". I took my violin with me and said why don't we do a Stephan Grappelli thing. "Hot Love" was in the charts at the time - Marc Bolan, and I said something like that, dead simple and we wrote the song in half an hour. We got the structure of the tune and Nod just filled in the gaps. That's the only song we've ever written like that."

Release
"Coz I Luv You" was released on 7" vinyl by Polydor Records in the UK, Ireland, across Europe, Scandinavia, Yugoslavia, Israel, Canada, South Africa, Australia, New Zealand, Argentina, Brazil and Japan. In America, it was released by Cotillion. The B-side, "My Life is Natural", would appear on the band's 1972 compilation Coz I Luv You and was later included on the 2007 compilation B-Sides. In 1977 and again in 1987, the single was re-issued in Germany. In 1983, it was re-issued in Belgium. In 1993, the song was re-issued in Germany again, but on CD.

"Coz I Luv You" was later featured in the 1998 film Velvet Goldmine and in the launch advert for the Ford Transit. More recently the song was used in an episode of the BBC drama Life on Mars. The song also features in the 2004 film El Lobo (also known as The Wolf), a political thriller revolving around the Spanish terrorist group ETA.