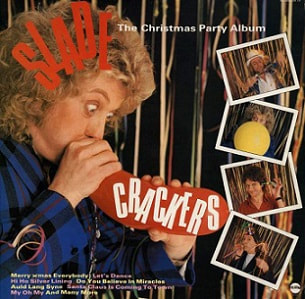 Crackers, also referred to as Crackers: The Christmas Party Album is a studio/compilation album, released by Telstar on 18 November 1985. It reached No. 34 in the UK charts and remained in the charts for seven weeks. It was certified Gold by the BPI the same month of release. Crackers contains a mixture of the band's previous hits, some re-recorded songs and a selection of covers. The new material on the album was largely produced by Jim Lea, with John Punter producing "Do You Believe in Miracles".

On Crackers, Slade tried to create an LP that had a party atmosphere to it. Since its original release, the album has had numerous re-issues over the years under various titles, including Slade's Crazee Christmas! (1999), The Party Album (2001) and Crackers: The Rockin' Party Album! (2006). Slade's Crazee Christmas would chart several times on the UK Budget Albums Chart between 2001-05.

Speaking of the album in a 1985 fan club interview, Lea said: "When Telstar first approached RCA, asking if we would like to be involved in such a venture, my immediate reaction was NO. But later I was talked into it by the other members. They convinced me that we could make this type of album really well as we could really make it a huge hit, especially with all the T.V. promotion. Frank [Lea], for example, was really pessimistic about us getting involved with this idea, but when he came into the studio and heard some of the numbers, he was grinning from ear to ear. We are sure that we have made the right decision."

The album, released in November, was a success in the UK, where it reached No. 34 and was certified Gold. Although Slade's label RCA released "Do You Believe in Miracles" as a single, a deal was struck with Telstar to include the song on Crackers. After the single peaked at No. 54 in the UK, it was suggested that its inclusion on the album had caused it to fail to reach a higher charting. In a 1986 interview, Don Powell said: "That could be a reason. Funnily enough, that was one of the bones of contention - Telstar said that they wanted it on the album, whereas we didn't because that would mean that it would split the sales between the single and the album. I know that if I personally like someone's single, and it's going to be on their latest album, then I'll wait and buy the album."

Commenting on the recording the album in a 1986 interview, Dave Hill said: "I enjoyed making the tracks for Crackers a lot more than those for Rogues Gallery." In his own interview that year, Powell revealed his thoughts on the Crackers project: "Well, we were a bit dubious at first, we thought that it might have been another Black Lace type of thing. When we actually recorded the cover versions though, we had a great time doing them. We just went into the studio and put them down one after the other - it was like playing live on stage."

While recording Crackers, Hill discovered Victor Herman, a busker, who was playing bagpipes in Oxford Street, London. As the band were due to record their own version of "Auld Lang Syne", Hill he invited Herman to add an authentic touch to the recording. Herman agreed, and when he'd finished recording his part, Slade gave him an envelope with a sizeable sum of money in it, along with their thanks and best wishes. Two days later, the envelope was returned by post, along with a letter from Herman, saying that he'd enjoyed himself so much in the studio that he didn't want the money. Slade later invited him to their Christmas party on 18 November 1985 - the release day of the album. At the party, Slade presented Herman with one of the band's Gold Discs as a keepsake.

Speaking to BBC Radio West Midland's Paul Franks in 2018, Lea said of the album: "They had to drag me into the studio kicking and screaming to record that. I didn't want to do any Christmas album, but I have to say in retrospect it was a lot of fun making it, because there was no onus, you know, it wasn't a single. We just had to have a good time."