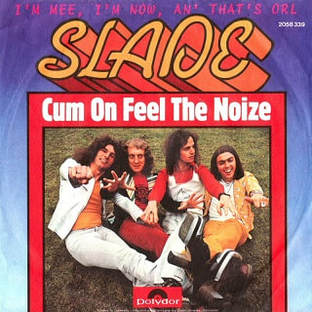 In 1983, the American heavy metal band Quiet Riot recorded their own version of the song, which was a million selling hit single in the United States, reaching No. 5 on the Billboard Hot 100.

The song, along with other Slade anthems, inspired American rock band Kiss to write several rock anthems of their own, including their 1975 song "Rock and Roll All Nite".

With the success of Quiet Riot's version of the song during the later months of 1983, the American clothing retailer Merry-Go-Round approached Slade with the request of recording a short version of the song for use in a commercial. The band agreed and recorded two versions of the song on 17 October 1983. The commercial, "Fashion Noize", was broadcast in 1984 and featured the chorus of the song, with the altered lyrics: "Come on girls and boys, feel the fashion noise, and dress wild, wild, wild, at the Merry-Go-Round".

Promotion
A music video was filmed to promote the single. It was created by Caravelle and recorded at the band's concert at The Hague in the Netherlands. The song was also performed on numerous UK and European TV shows upon release, including the UK music show Top of the Pops.

Originally, lead vocalist Kevin DuBrow was dead set on not covering the song, because he wanted the band to write every song on the album and was not a big fan of Slade. Instead, the band decided to try to cover the song as badly as they could so the label would refuse to release it.

Speaking to Record Mirror in 1983, Lea stated: "Quiet Riot phoned us up and asked if they could use the song. They were a bit cheeky really because they had already recorded it. I think they've done a very good version and the song is a classic. Because of the success of the song in the States, we've also got five major record companies trying to outbid each other and sign us to a major deal. We've had ridiculous offers coming over the phone. We'll give you five Rolls Royces if you go with us, that kind of thing."

In a Ludwig drums interview, Quiet Riot's drummer Frankie Banali said: "I think [Slade] were a little bitter about our success with their song. They had a hit with it in other territories but not in the US and later our version overshadowed theirs worldwide. Any real success in the US always seemed to elude Slade, so Quiet Riot having a major hit with "Cum On Feel the Noize" was bittersweet for them. When Quiet Riot played the Hammersmith Odeon in London in 1983, we offered them an invitation complete with a limo service to attend the show, but they never responded. Later I was shopping in Kensington Market and ran into Jimmy Lea. I wanted to shake his hand and thank him for writing a great song. He looked into my face, and walked away leaving me with nothing in my hand but air! I look at the situation like this: Quiet Riot received a great measure of success with the help of that song, and Slade received a great deal of money for their trouble. Fair enough!"