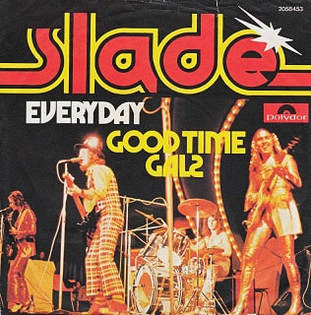 Everyday is Slade's second single from their fourth studio album Old New Borrowed and Blue. Released by Polydor on 29 March 1974, it reached No. 3 in the UK and remained in the charts for seven weeks. The single received a Silver certification from BPI in April 1974. The song was written by Noddy Holder, Jim Lea and his wife Louise Lea (uncredited), and produced by Chas Chandler.

Background
With the release of Old New Borrowed and Blue in February 1974, the band's manager Chas Chandler suggested "Everyday" be released as the second single from the album. The band's popularity in the UK meant that there was a big demand for a new release. Having reached No. 1 over the Christmas period with "Merry Xmas Everybody", the band, particularly Lea, did not feel the song was single material. On the band's flight to Australia for a short tour there, Chandler and Lea argued about the idea, however Chandler ultimately won, and "Everyday" was released as a single in March 1974. Being a piano-led ballad, which was an unusual style for Slade, the band knew they were taking a risk by releasing it as a single. "Everyday" reached No. 3 in the UK and would go on to become a regular sing-a-long inclusion at the band's concerts. It was released prior to the band's next tour.

The idea for "Everyday" came out of an evening at Lea's house where he was entertaining friends. Responding to the question of how he wrote songs, Lea said "easy, anyone can do it" and each person then attempted to come up with their idea for a song on the spot. Lea's wife Louise had come up with an idea, which formed the basis of "Everyday"'s verse. Lea thought her idea was very good and soon developed it further to become a Slade song. While in Olympic Studios writing more of the song, he turned down the offer of having a coffee with David Bowie in order to try and finish writing it. Once he had finished the music and some more of the lyrics, Holder finished the final lyrics off. During the recording of the song, Dave Hill was abroad on his honeymoon so Lea played the guitar solo.

During a 2017 live question and answer event with Lea at the Robin 2 club, Lea was asked whether his wife received a writing credit for the song. He replied: "No, she didn't. No, actually, I feel really bad about that and I have spoken to Nod about it. She should have a credit, it should be Lea, Lea, Holder. Why I didn't credit Lou on it was because it wasn't that long before with the John and Yoko thing going on, where Yoko was in the studio all the time and it was messing about with the Beatles. And I didn't want to have that sort of pressure. I mean, Lou wouldn't have done it anyway, she would never have pressured me. She should have a credit now I think, I should put it to the publishers that that's what we should do."

In 2013, the song was used in a UK advert for the Nexus 7 tablet. As a result, it re-entered the UK chart in late November and peaked at No. 69 the following month, due to downloads.

Release
"Everyday" was released on 7" vinyl by Polydor Records in the UK, Ireland, across Europe, Australia, New Zealand, South Africa and Japan. The B-side, "Good Time Gals", had also previously appeared as an album track on Old New Borrowed and Blue.

Promotion
No music video was filmed to promote the single as the band were busy on their "Crazee Nite" UK tour. In the UK, the band performed "Everyday" twice on the music show Top of The Pops (28 March and 11 April), and on Clunk Click. The band also performed the song on the Dutch AVRO TV show TopPop.