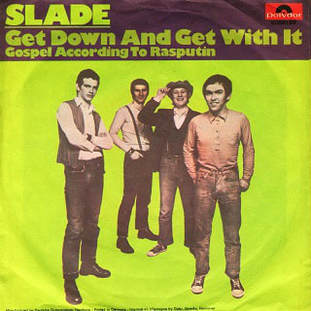 Get Down and Get with It is a non-album single, released by Polydor on 21 May 1971. It reached No. 16 in the UK, giving the band their first Top 40 single, and remained in the charts for fourteen weeks. In the United States, it was released in August 1971 by Cotillion, but did not chart. The song was written by Bobby Marchan and produced by Chas Chandler.

"Get Down and Get with It" was first released by Marchan in 1964 as "Get Down with It". Later in 1967, Little Richard would record his own version, which is what Slade based theirs on.

Background
After the commercial failure of their 1970 album Play It Loud, Slade and their manager Chas Chandler began considering the band's next career move. Deciding to drop the skinhead image they had adopted in 1969, the band and Chandler felt that the best way to make a commercial breakthrough would be to capture the band's strong reputation as a live act onto record. The chosen song was "Get Down and Get with It", which the band frequently played live to great success. Released in May 1971, the song successfully broke the band into the UK and Europe. It reached No. 16 in the UK and would be the first of seventeen consecutive Top 20 hits for the band, which included six number ones.

Prior to recording the song in the studio, the band had established "Get Down and Get with It" as a popular number in their live-set, based on Little Richard's version. In the band's 1984 biography Feel the Noize!, Holder recalled: "The first time we heard that was at the Connaught in Wolverhampton and whenever the DJ used to play it, it went down a storm. We started doing it and the skinheads used to love that bit at the finish where you put your hands in the air and take your boots off and all that. It was just right for our tempo and they loved it so much, it took any thoughts of aggravation out of them."

Impressed by the general audience reception of the song, Chandler suggested recording the song as a single. The band entered Olympic Studios in Barnes for its recording, where Chandler told the band: "Just play it like you do on-stage. Blast it out like it's live, and pretend that there's an audience in there with you." Successfully recorded in a single take, the band included foot-stomping and hand-clapping in the recording to give the song a live feel.

The single was released twice during 1971; firstly on 21 May as "Get Down and Get with It" with writing credit for the song being given to the band and Little Richard. The band had believed the song to have been written by Little Richard. However, as the song started to climb the charts, publishers on behalf of Marchan soon got involved. The single was hurriedly re-issued as "Get Down with It" and correctly changed the writing credit to Marchan. In his 1999 biography Who's Crazee Now?, Holder recalled: "The record company sorted out the lawsuit, but we learnt to be more careful in future." "Get Down and Get with It" would remain a popular song within the band's set-list for the rest of their live career.

Lea said of the song to Record Mirror's Val Mabbs in 1971: "We brought it out to get in the charts. It was fantastic on stage, we used to use it for an encore number." Holder told Phil Symes of Disc and Music Echo in 1971: "We tried very much to get the excitement of the stage act on the record and I think we succeeded. That's why it was a hit. We could do it on stage and the kids could go away and buy it and get the same thing."

In 1990, Kiss AMC sampled a segment of the Slade Alive! version of the song for their single "My Docs", which featured an appearance from Holder in the music video. The song reached No. 66 in the UK.

Release
"Get Down and Get with It" was released on 7" vinyl by Polydor Records in the UK, Ireland, across Europe, Scandinavia, Australia, New Zealand, Mexico, Brazil and Argentina. In America, it was released by Cotillion. The B-sides, "Do You Want Me" and "Gospel According to Rasputin", would appear on certain editions of the band's 1972 European compilation Coz I Luv You. They were also included on the 2007 compilation B-Sides. For the UK and Ireland release, both B-sides were included on the single, while in most European countries, only "Gospel According to Rasputin" was included.

Music video
A music video was filmed to promote the single, although it received few airings at the time. The black-and-white video was filmed by Caravelle. It featured Slade in the back of an open-roofed American car on the flyover roads in Central London. Arriving at a power station, the band climb onto the roof, dance and walk around, then return to the car and drive off. In an episode of Raiders of the Lost Archive, Holder was shown the clip for the first time since the video was created.

In a 1973 interview with Music Star, Dave Hill recalled the making of the song's video in relation to his fear of heights: "We were making a special film for Top of the Pops at a power station. I was wearing a silver suit so they decided to film me walking along an overhead ledge as though I was a spaceman who'd just landed. It was very high up and I suddenly looked down at the ground. That was a mistake because I just froze. I had this terror of falling and I just froze completely, like a cat does when it gets stuck up a tree. You know, you watch that cat and you know it could get down the same way it came up - but the cat's too frightened, and it just sits there till somebody rescues it."