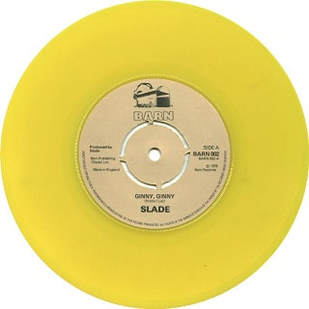 Ginny, Ginny is Slade's first single from their eighth studio album Return to Base. Released by Barn Records on 25 May 1979, it failed to chart in the UK. The song was written by Noddy Holder and Jim Lea, and produced by Slade.

Background
"Ginny, Ginny" was released at a time when Slade were experiencing a low wave of popularity and commercial failure. The band were restricted to playing small venues, including universities and clubs, and although they could still draw small crowds, the band's new releases were generally chart failures.

After a string of non-album singles, "Ginny, Ginny" was released in May 1979 as the lead single from the upcoming album Return to Base. Continuing the band's string of chart failures, the single failed to enter the UK Top 75. Despite this, the song did enter the Top 200 Best Sellers Chart, which was confirmed by Barn Records managing director Mike Hales in a Slade fan club magazine at the time.

"Ginny, Ginny" originally had the titles "Jeanie" and "Ginny Come and Get It While You Can" before the band settled on its final title. Before its release as a single, the song was featured in the band's live-set. Prior to release, Lea spoke of the song and the band's hopes of returning to the charts: "It's very catchy, and we're going to make it, yeah. Our writing is returning to a more concise format. I mean songs like "Be" are hardly concise, they're clever, but hardly the sing-along down at the pub type song." In a 1979 fan club interview after the single's release, Don Powell spoke of the song: "It didn't sell enough to get into the charts, but we were pleased with it."

Release
"Ginny, Ginny" was released on 7" vinyl by Barn Records in the UK and New Zealand. The B-side, "Dizzy Mama", would later appear as a track on the band's 1981 album We'll Bring the House Down. In the UK, the single was released on yellow-coloured vinyl in the hope of gaining more sales. In New Zealand, a standard black-coloured vinyl was released. "Ginny, Ginny" would also later appear as the B-side to the band's 1980 Belgian-only single "I'm a Rocker".