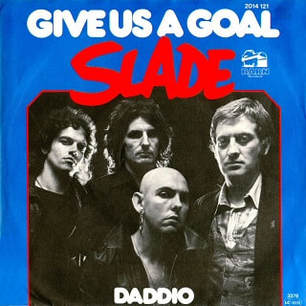 Give Us a Goal is a non-album single, released by Barn Records on 24 February 1978. A football-themed song, it failed to make an appearance on the UK Singles Chart. The song was written by Noddy Holder and Jim Lea, and produced by Chas Chandler.

Background
"Give Us a Goal" was released at a time when Slade's waning success led to the band playing small venues, including universities and clubs. Although they could still draw small crowds, the band's new releases were generally chart failures. The band's October 1977 single "My Baby Left Me - That's All Right" had reached the UK Top 40, but the successive single "Give Us a Goal", released in February 1978, was one of a string of singles to fail to chart during this period. It had been released to coincide with the band's UK tour during March-April. Despite failing to reach the UK Top 50, the song reached No. 70 on chart compiler Gallup's Weekly Sales Top 100 Chart.

Having written the tune, the idea for the lyrics of "Give Us a Goal" came after Holder suggested the band come up with a song about football to try and appeal to the band's following, many of which were football supporters. For the 1991 video compilation Wall of Hits, Lea recalled: "I wrote this tune and I said to Nod 'I've got this rock 'n' roll tune and this is the way it goes' and Nod said 'Let's do one about football because we've always had this football following, and scarves and "You'll Never Walk Alone" and always this great empathy with the whole thing about football. I was never really convinced about doing a football song, nevertheless the video was fun." The song was originally recorded at Advision Studios in London in January/February 1978, and later re-recorded at Olympic Studios later in February.

Release
"Give Us a Goal" was released on 7" vinyl by Barn Records in the UK, Ireland, France, Germany and Belgium. It was also released on 12" vinyl in Italy, which was Slade's first release on 12" vinyl. The B-side, "Daddio", was exclusive to the single and would later appear on the band's 2007 compilation B-Sides.

Promotion
In the UK, the band performed the song on the TV shows Cheggers Plays Pop and Get It Together. In Record Mirror, an advertisement for the single featured a cartoon drawing of the band scoring a goal against Lea who appeared as the goalkeeper.

Music video
A music video was filmed to promote the single, which was shot in February at Brighton & Hove Albion F.C.'s Goldstone Ground in Hove. The band's manager Chas Chandler had arranged the use of the ground. The video featured shots of the band performing the song in front of a crowd, while other sequences showed the band playing football with the Brighton team. The footage of the band performing the song was shot prior to a home match, while the footage of the band playing football had been filmed a couple of days before during a practice match. On the days of filming, it was so cold that Dave Hill had to wear a hat, while the band could hardly play football in the weather.

The director of the video insisted the film crew keep filming until one of the band members scored a goal against Brighton's goalkeeper. It took a long time for the band to achieve this, with Don Powell scoring the goal. In 1991, Holder recalled: "We were actually playing with the Brighton team and they kicked the shit out of us. Alan Mullery was the manager at the time and he was shouting to the team from the sidelines, "Let them have a kick!". And I had to take a penalty at one point and could I get the ball in the net? I must have tried ten times and in the end the goalie was rolling on the floor pissing himself laughing."