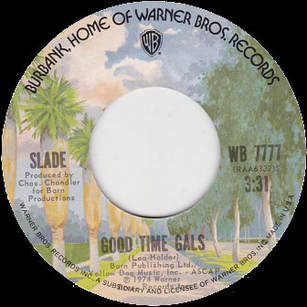 Good Time Gals is Slade's second single from their fourth studio album Old New Borrowed and Blue. Released in the United States by Warner Bros. Records in February 1974, the single failed to enter the Billboard Hot 100 Chart. Polydor also released the song as a single in Australia. The song was written by Noddy Holder and Jim Lea, and produced by Chas Chandler.

Background
The material on Old New Borrowed and Blue was recorded amid the band's touring and promotional activities in late 1973. It also marked the return of Don Powell to the studio after suffering a near-fatal car crash in July, which briefly threw the band's existence into doubt. In America, the album was titled Stomp Your Hands, Clap Your Feet and released in February 1974. That same month, the lead single in America, "Good Time Gals", was released but failed to chart, as did the follow-up "When the Lights Are Out".

Release
"Good Time Gals" was released on 7" vinyl by Warner Bros. Records in America and by Polydor in Australia. The B-side on the American release, "We're Really Gonna Raise the Roof", was written by Holder and Lea, and also included on Old New Borrowed and Blue. In addition to the main US release, a promotional version was also issued, containing "When the Lights Are Out" on both sides of the vinyl, one in mono and the other in stereo. In March, "Good Time Gals" also appeared as the B-side to the single "Everyday". However in Australia, Polydor chose to reverse the single so that "Good Time Gals" became the A-side and "Everyday" the B-side.