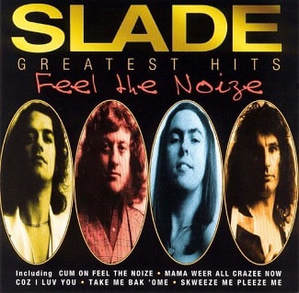 Greatest Hits - Feel the Noize is a compilation album, released by Polydor on 13 January 1997. It reached No. 19 in the UK and remained in the charts for six weeks. In 2013, the album received a Gold sales certification by the British Phonographic Industry.

Background
The success of the compilation encouraged other bands of the Glam Rock era to release their own 'Greatest Hits' packages. At the time, a resurgence in Seventies music was happening, due to the constant mentions from Blur's Damon Albarn and Oasis's Noel Gallagher.

In light of the band's commercial resurgence and new-found credibility, Holder told The Guardian in June 1997: "People may have looked on us as a joke, but the people who grew up with us loved us to bits and still do. The younger generation now see that we were a serious rock band. Suddenly, for want of a better word, we've become credible. It's taken a long time." Speaking of the critical acclaim of the compilation, Holder added: "Two or three years ago we'd have never got reviews like that. Suddenly we're regarded for what we were - a damned good rock band. When we were touring we were one of the top five rock attractions in the world for the bulk of our career. We had to be doing something right."

Asked about a potential reunion in light of the compilation's success, Holder said: "The other three would. It's me who's the stumbling block. I got tired of touring. I'd done it for 20-odd years. We never had a falling out or anything, but I became a bit bored of it. It was like a marriage - I don't think we were in love any more as a band. We were in a rut after 25 years together."