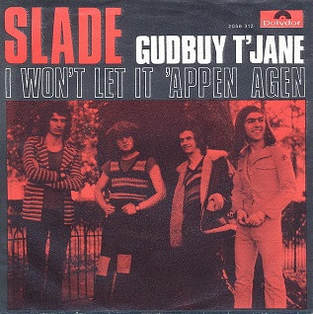 Gudbuy T'Jane is Slade's third single from their third studio album Slayed?. Released by Polydor on 17 November 1972, the single reached No. 2 in the UK and remained in the charts for thirteen weeks. It received a Silver certification from BPI in 1973. In the United States, the single was released in February 1973 and reached No. 68. The song was written by Noddy Holder and Jim Lea, and produced by Chas Chandler.

Background
After achieving their breakthrough hit with "Get Down and Get with It" in 1971, Slade would continue to achieve further success with their follow-up singles "Coz I Luv You", "Look Wot You Dun" and "Take Me Bak 'Ome". The 1972 live album Slade Alive! also gave the band their first success on the albums chart, reaching No. 2. During 1972, the band recorded their third studio album Slayed?, with the lead single "Mama Weer All Crazee Now", being released in August 1972. The song topped the UK chart, and "Gudbuy T'Jane" was released as the follow-up single in November 1972, after Slayed? had already been released earlier in the month. "Gudbuy T'Jane" reached No. 2 in the UK and was kept from the top by Chuck Berry's "My Ding-a-Ling". The song reached No. 1 on the New Musical Express Chart, and was also Slade's most successful single of the 1970s in the United States, where it reached No. 68. In November, Disc reported the single had nearly reached 100,000 copies in advance orders in the UK.

The idea for "Gudbuy T'Jane" came to Lea while the band were on an American tour. Lea first had the idea for the song while sitting by a pool in San Francisco. He completed the song in the toilet on the plane flight home. Holder finished off the lyrics, but also changed Lea's "Gudbuy" to "Hello T'Jane". However, Lea felt "Gudbuy T'Jane" sounded better and so it was changed back to his original idea. The titular character was based on a real-life woman who demonstrated a sex machine on an American TV show on which the band appeared. When recording the song, the band settled on their second take. They attributed the loose feel of the recording to the fact they had not played the song until the day of its recording.

In a 1984 interview with Record Mirror, Lea recalled the song's creation: ""Gudbuy T'Jane" was written by the side of a swimming pool in Fresno just outside San Francisco. I remember lying there one day on our afternoon off and Chas Chandler, who was our manager, said to me "Jimmy, if you've got nothing to do - write a song cos there's money in it!". Everyone else was messing about pissed and I was lying there bored, I'm always bored. So I thought right - write a song, go! I went "Goodbye T'Jane, Goodbye T'Jane" and then we were flying back to finish off the Slayed? album and I thought right, I need the next bit to that. I went and had a pee in the bog and I got all excited and sang it over and over, then suddenly I went "I say you're so young", and it just blurted out. So that was it, finished at twenty thousand feet. Then when we eventually got into the studio, we had the backing track done and Nod said "Right I've done the lyrics" and he went up and sang "Hello T'Jane". I'll never forget that, it was so funny."

In a 1980 interview with Sounds, Lea said of the band's past hits: "I didn't even like some of those old ones. We all hated "Gudbye T'Jane" when we made it. It was knocked up in half an hour at the end of one of our studio sessions." In a 1981 fan club interview, Don Powell cited "Gudbuy T'Jane" as one of his favourite Slade songs.

The B-side, "I Won't Let It 'Appen Agen", appeared on Slayed? as an album track. Prior to the selection of the song as the single's B-side, another track had been considered, titled "Dreamboat". Written by Lea and Powell, the song never received a release and whether the recording still exists is uncertain.

Music videos
Two music videos were filmed to promote the single, both of which were filmed by Caravelle. The first portrayed the band as scientists in an observatory, sporting white coats and clipboards. The second film, commissioned by Polydor Records, was recorded at the Rainbow Theatre in London on the afternoon before the band's concert there. Performing the song on the stage, the video shows the band's clothes and instruments covered with "I've Been Slayed" stickers. Later during the actual concert, footage of the audience was filmed during the band's performance of their opener "Hear Me Calling" for use in the video.