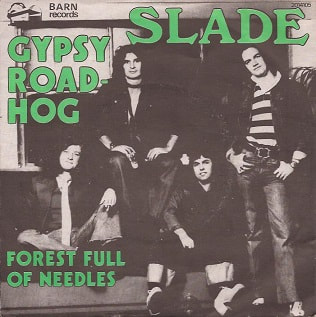 Gypsy Roadhog is Slade's first and only single from their seventh studio album Whatever Happened to Slade. Released by Barn Records on 21 January 1977, it reached No. 48 in the UK and remained in the charts for two weeks. The song was written by Noddy Holder and Jim Lea, and produced by Chas Chandler.

Background
Having returned from the US in late 1976, Slade found the UK music business much changed from when they had left in 1975 to try and crack the American market. Punk rock had exploded to become the dominant influence on youth culture and the music press. In August 1976, the band began recording their new album Whatever Happened to Slade. In January 1977, the band released "Gypsy Roadhog" as the lead single. However, after performing the song on the children's television show Blue Peter, complaints about the song's lyrics saw the song largely removed from Radio 1's playlist. As a result, the single stalled at No. 48, and remained in the charts for only two weeks. Whatever Happened to Slade was released in March but failed to chart.

The song's lyrics depicted the tale of a cocaine dealer in America and as such included various drug references. In a 1989 interview on Sky by Day, Holder recalled of the song and its "banning": "We'd written this called "Gypsy Roadhog" and it was going up the charts, and Blue Peter asked us to appear and we went on and it went out live. The song was all about a cocaine dealer in America, but it was actually an anti-drug song. The next day in all the newspapers, Keith Richards had just been arrested for cocaine and there's all things in the paper about using silver spoons and everything. There was a line about a silver spoon in our song and Blue Peter went berserk when they found out the song was about cocaine, 'cause it had already gone out then. Radio One banned the record and it sank without a trace."

Release
"Gypsy Roadhog" was released on 7" vinyl by Barn Records in the UK, Ireland, Belgium and Germany. It was the first Slade single to be released on Barn, which was owned by the band's manager Chas Chandler. The B-side, "Forest Full of Needles", was exclusive to the single and would later appear on the band's 2007 compilation B-Sides.

Promotion
The band performed the song on Top of the Pops, Supersonic and also Blue Peter. For the Blue Peter performance, an alternative and shortened version of the song was used, featuring amended lyrics. The song was performed by the band riding in an open-roofed car. In a 1986 fan club interview, Lea recalled that the BBC demanded Slade alter the words for the performance of the song on the show. Despite the change of lyrics, complaints were still received and the single received little play on Radio 1. The performance of the song on Top of the Pops would not surface again until January 2012 where it was fully played on BBC4.

Critical reception
Contemporary reviews
Retrospective reviews
In a 2010 review of Whatever Happened to Slade, Classic Rock commented: ""Gypsy Roadhog" and "Big Apple Blues" are wide-wheeled, turbo-powered throwbacks to the prized US market with which the band had just lost their life-or-death battle."