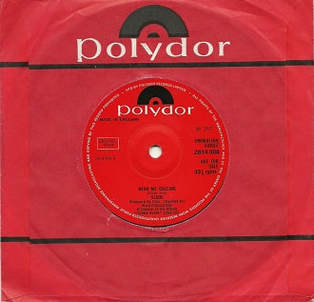 Hear Me Calling is a promotional single, released by Polydor Records on 12 February 1972 from the band's live album Slade Alive!. A cover of the Ten Years After 1968 song, it was written by Alvin Lee, with Slade's version produced by Chas Chandler.

Background
Having made their UK breakthrough with the successful singles "Get Down and Get With It", "Coz I Luv You" and "Look Wot You Dun", Slade decided that the best way to break into the album charts would be to capture their live sound on record. In October 1971, the band played three consecutive nights at London's Command Theatre Studio in front of a studio audience. The result was Slade Alive!, released to commercial success and critical acclaim in March 1972, and has since been considered as one of the greatest live albums of all time. Prior to the release of the album, "Hear Me Calling", the opening number, was released as a promotional single in February. The release was limited to 500 copies.

"Hear Me Calling" was used as the band's show opener since the early 1970s. In 1974, it was replaced by "Them Kinda Monkeys Can't Swing", though the band later returned to "Hear Me Calling" in 1976. It would remain the regular opener until 1980, when it was replaced by "Dizzy Mamma". The band began performing "Hear Me Calling" when Noddy Holder, Jim Lea and Don Powell happened to hear the song being played by a DJ prior to a Yes concert at the Marquee Club in London in the late 1960s. When Lea saw the Spencer Davis Group earlier that decade, prior to him joining the 'N Betweens, he was impressed by their opening number. So after discovering "Hear Me Calling", Lea suggested to Holder that they both sing in unison on Slade's live opening number to generate the same effect.

During a 2017 live question and answer event with Lea at the Robin 2 club, Lea spoke of the song: "That came from a time when Don, Nod and myself used to get in Nod's dad's window cleaners van and go down to London. Dave never used to come with us. We used to go down to buy clothes and go to Carnaby Street and whatever, and we would always go to see a band at the Marquee. We went to see Yes who were great, the first incarnation of Yes, and while we were waiting for the band to come on, this track was playing and Don and I were going "what the heck is this?" and there was just something creepy about it, you know. And so I went, in my shyness, up to the DJ and I said "Who was playing that record that you just played?" and he said it's Ten Years After. I said "Ten Years After? I've never heard of them" and he said "Oh, they're really good". So we got the record and we started to play it."

In turning the song into the successful show opening it became for Slade, Lea recalled: "I remembered that the first time I saw the 'N Betweens was at the Civic Hall and I was watching the Spencer Davis Group; they were on the bill as well and they started off with this "talking about my baby, she's your baby, she's my baby, she's so fine..." and I thought "Christ, this is rubbish". It was just Muff and Spence doing that, and I'd heard about this Steve Winwood guy, and then suddenly he came in with this "love the way she walks..." - it was just this Ray Charles voice - and it was like "What! What on earth is that? Is it a bird or is it a plane?" and it was just fantastic. And so I remembered that and said to Nod, "Why don't us two go on the mike and do that? And that's what we did. By the time a couple of years went by, now we got the big amps, Christ did that make an impact! And people used to say it was the greatest opening number they'd ever seen."

In a 2011 interview on the Radcliffe & Maconie Show, Holder stated that while on tour in America with Ten Years After, Alvin Lee, had told Slade that their version had made him more money than the Ten Years After original ever did. Lea recalled in 2017: "Years went by and we were in America, we were playing with Ten Years After and Alvin Lee was just on his own, not with the rest of his band, just on his own [at the] Sunset Marquis hotel. And Dave went walking around that side of the hotel and he said "Alright mate? How's it going?" and Alvin looked up and said "Thanks for the royalties"."

Release
"Hear Me Calling" was released on 7" vinyl by Polydor Records in the UK only. The B-side, "Get Down With It", was also taken from Slade Alive!. Limited to 500 copies, the single aimed to promote the upcoming album.

Critical reception
Contemporary reviews
Formats
7" single
Personnel
Slade
Additional personnel
Studio version
Following the band's commercial breakthrough with "Get Down and Get with It", "Hear Me Calling" was considered as the potential follow-up. The band attempted to record it in the studio, but they felt they couldn't better it compared to their live performances of the song. This studio version of "Hear Me Calling" surfaced in 2011, when a vinyl acetate was made available to Salvo who included the version as a bonus track on their remaster of Sladest.

Speaking to Absolute Radio in 2011, Holder said: "We had a good bit of memorabilia recently because we remastered and released, last month, Sladest from 1973. We wanted to put some bonus tracks on it and a fan found a vinyl acetate of a track called "Hear Me Calling" that we used to open our show with for years. Now it's been on live albums in the past, but the studio version had got lost many years ago, the tapes and everything. And he found this acetate, and we managed to clean it up, remaster it and we've put as a bonus track on Sladest. We knew we'd recorded it, but we couldn't ever find the tapes for it. Obviously, the recording studio, when they had a clear out or whatever, they'd obviously got rid of it accidentally so we'd never been able to track it down. But this kid found an acetate; it had obviously been thieved at some time from either a recording studio or a radio station or something, and it does the rounds, and eventually gets into somebody's hands who's a collector."