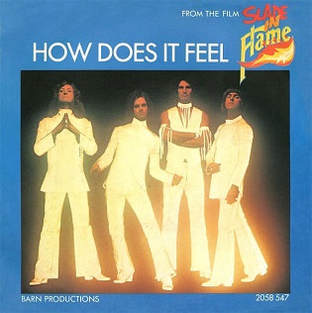 How Does It Feel is Slade's second and final single from their fifth studio album/first soundtrack album Slade in Flame, in promotion of the film of the same name. Released by Polydor on 7 February 1975, it reached No. 15 in the UK and remained in the charts for seven weeks. In the United States, the song was released by Warner Bros. Records in September 1975, but failed to chart. The song was written by Noddy Holder and Jim Lea, and produced by Chas Chandler.

Background
By 1974, Slade had become a big success in the UK, Europe and beyond; however the band felt that continuing to provide 'more of the same' was not what they wanted to do. The band's manager Chas Chandler suggested Slade do a movie, to which the band agreed. Rather than producing a film portraying the band's "happy-go-lucky" image, the subject matter was based on the gritty tale of the rise and fall of a fictional 1960s group called Flame.

To accompany the film, Holder and Lea began writing material for a soundtrack album, which would continue to see the band break out of their successful formula and try different musical ideas. In late 1974, the lead single "Far Far Away" had reached No. 2, while Slade in Flame peaked at No. 6. Following the film's release in January 1975, it was decided to release "How Does It Feel" as the second single. For its release as a single, the song was edited to reduce its duration. Released in February, "How Does It Feel" reached No. 15, which was the band's first single not to reach the UK Top 5 since their 1971 breakthrough with "Get Down and Get with It".

The melody of "How Does It Feel" was the first Lea had ever written back in circa 1963, while he was still in school. He came up with the idea on an old piano which he later described as having half the keys missing. Although the tune never developed any further at that time, Lea later revisited it for use as the theme tune for Flame. Holder wrote the song's lyrics and it became "How Does It Feel". The song featured a brass section, performed by members of Gonzalez. In the band's 1984 biography Feel the Noize!, Lea recalled: "The DJ's loved it. It was an old song that I'd written and Nod put some great lyrics to it. Tommy Vance said that it was good but that we were in for a hard time. But it didn't matter to me whether it was number one or number 15... to me it was a much better record than we'd made before and that was all I cared about."

In a 1986 fan club interview, Dave Hill spoke of the song: "Yes, it was totally different to anything we had ever done before, but you see we were capable of that sort of thing before, though our manager/producer Chas Chandler used to keep us clear from that - keeping the stimulus of the right type of music for the right people. Trying to be too clever was considered at the time to be going in another direction. Whether it has helped us in the long run is questionable. We were maybe cleverer in those early years, which could have introduced us to new things - but it never happened, apart from "How Does It Feel". It was already written and it just happened to fit in with the film. It wasn't a huge hit unfortunately, but I thought it was a good idea."

Despite the song's disappointing charting in 1975, "How Does It Feel" is now widely considered as one of the band's finest songs. In 1999, Noel Gallagher of Oasis said the song was "one of the best songs written, in the history of pop, ever".

Release
"How Does It Feel" was released on 7" vinyl by Polydor Records in the UK, Ireland, across Europe, Scandinavia, Yugoslavia, Australia and Japan. In America, it was released by Warner Bros. Records in September 1975. For its American release, the song was edited down even further, with a length of just over three minutes. The B-side on the Polydor releases of the single was the Slade in Flame album track "So Far So Good". In America, "O.K. Yesterday Was Yesterday" featured as the B-side, also taken from Slade in Flame. In the UK, the first 200,000 copies of the single featured a colour sleeve.