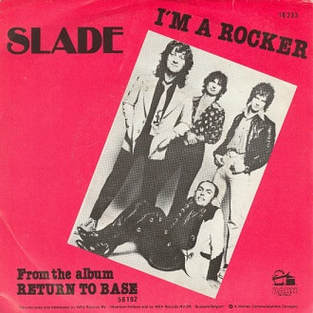 I'm a Rocker is Slade's third and final single from their eighth studio album Return to Base. It was released by WEA in 1980 in Belgium only. A cover of a 1970 Chuck Berry song, "I'm a Rocker" was written by Berry, with Slade's version produced by the band.

Background
Since 1977, Slade had experienced a low wave of popularity and their releases were met with a lack of chart action, including their 1979 album Return to Base, and its two singles "Ginny, Ginny" and "Sign of the Times". Despite its failure in the UK, the album became a big success in Belgium and would go on to top the charts in 1980.

Initially, Return to Base had to be purchased by Belgian fans as an import. The album soon climbed to No. 1 on the Telemoustique chart, a weekly rock chart compiled by public votes. It also topped the Belgian radio station Impedance's daily chart on several occasions. Due to the interest in the album, Warner Bros. approached Slade with the offer of giving the album a proper release there. The album was released in 1980, along with "I'm a Rocker" as a single, which had been receiving a lot of airplay on Belgian radio.

Noddy Holder originally discovered "I'm a Rocker" after hearing it played on BBC Radio 1. After tracking down a copy, he then suggested the band start playing it live in 1978, usually as part of their encores. Speaking of his discovery of the song, Holder said in a 1980 fan club interview: "How we came to do the number came about due to me listening to Annie Nightingale one Sunday afternoon, and she played "I'm a Rocker" by Chuck Berry. It was one of his new numbers, it's not an old Chuck Berry number. And I really liked it. Anyway, I mentioned to the others in the band that I'd heard a really great Chuck Berry number, and we thought no more about it. In the meantime I searched high and low for the record, I couldn't get it anywhere, absolutely nowhere could I get hold of that record. Then I found out eventually that it was available on a French import on Contour Records. And I managed to get a copy of the album that it's on, which is actually called "I'm a Rocker", from an import shop. Then after listening to it, we started to play it live on stage, first of all just as a jam at the end of the set."

While recording Return to Base, the band decided to record the song spontaneously at the end of one of their studio sessions. Holder recalled: "One night we went into the studio, we'd been all over the pub, and we had half an hour left at the end of a session, and we decided to record it, and we got it down in one take. The feel is there in that song, it's us, Slade - it's what we are all about." He added further in a 1981 fan club interview: "We'd been tatting about with it at rehearsals for some time, then once when we'd got into the studio about 10 o'clock at night, after being over at the pub, and we put it down with just us playing the number and me singing it, and it turned into a really good song."

In a 1979 fan club interview, Dave Hill singled the song out as one of his favourites from Return to Base: "My favourites are the rock 'n' roll one ("I'm a Rocker") and the instrumental one ("Lemme Love into Ya") - probably because of the way that they come over on stage more than anything else."

Release
"I'm a Rocker" was released on 7" vinyl by WEA (Warner Elektra Atlantic) in Belgium only. The B-side, "Ginny, Ginny", was also taken from Return to Base. In a 1980 fan club interview, Holder revealed why "I'm a Rocker" was chosen as a single: "Well, that was the track that was getting the most airplay from the album. But it's not just a case of that applying in Belgium – we've had so many people writing to us asking why we've not released it as a single. "I'm a Rocker" is not even one of our songs though – it's a Chuck Berry number."

In addition to appearing on Return to Base, "I'm a Rocker" would reappear on the band's 1980 extended play Six of the Best. It would also feature as the closing track on their 1981 studio album We'll Bring the House Down, released following their 1980 Reading Festival triumph.

Promotion
During 1980, a film crew from Belgium traveled to the UK to film Slade performing the number at Portland Studios in London. Aside from performing the song and some general jamming, the band also featured in brief interview segments, as did manager Chas Chandler.