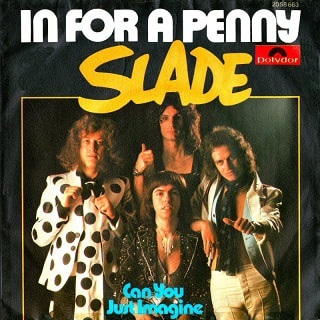 In for a Penny is Slade's first single from their sixth studio album Nobody's Fools. Released by Polydor on 14 November 1975, it reached No. 11 in the UK and remained in the charts for eight weeks. The song was written by Noddy Holder and Jim Lea, and produced by Chas Chandler.

Background
By 1975, the band began feeling stale and felt they had achieved as much success in the UK and Europe that they could. Slade and their manager Chas Chandler decided that the next best career move was to try and crack America. The band agreed to move to there and build a reputation for their live performances from scratch, just as they had in the UK. In between touring, the band recorded their next album, Nobody's Fools, which saw the band move towards a more "American" soul/pop sound in attempt to gain a commercial break on the American charts. "In for a Penny" was released as the album's lead single in November 1975, particularly because it had a rhythm that was similar to their 1971 chart topper "Coz I Luv You". The song reached No. 11 in the UK.

Described by Holder as having a "laid-back sound", "In for a Penny" is notable for being the only song in Slade's recording career to feature accordion. It was played by Lea, although in TV performances of the song, Holder mimed the part on a concertina. Dave Hill's guitar solo is the longest heard on a Slade single. Just before the second guitar solo in the track, Holder shouts the line "Ee, they got a band". This was a reference to a British TV advert in which a female character mistakes the entrance of threatening gangsters carrying violin cases for the arrival of a music combo.

In a 1986 fan club interview, Hill spoke of the song in relation to it being released as the album's lead single: "Yeah, that seemed a mistake! When we came back from touring in the States and released that, I think a lot of fans were disappointed, though I personally liked the track. They thought we'd come back with something heavy, so it may have seemed lightweight to them. It was recorded at the Record Plant, New York, as part of the Nobody's Fools/America project."

Release
"In for a Penny" was released on 7" vinyl by Polydor Records in the UK, Ireland, Germany, France, Belgium, Sweden, the Netherlands, Spain, Portugal, Scandinavia, Yugoslavia, Australia and Japan. The B-side, "Can You Just Imagine", was exclusive to the single and would later appear on the band's 2007 compilation B-Sides. In the UK, the first 30,000 copies of the single had a picture sleeve.

Promotion
No music video was filmed to promote the single. In the UK, the band performed the song on the TV shows Top of the Pops and Supersonic. The song's performance on Top of the Pops has not surfaced since its original broadcast. In 1986, Lea recalled returning to Britain to perform the song on Top of the Pops. The following day the band watched their performance at Freddie Mercury's flat. On the same show, Queen appeared with "Bohemian Rhapsody" and Lea remembered being "totally knocked out" watching their video, while Mercury did not realise what an achievement his group had made.