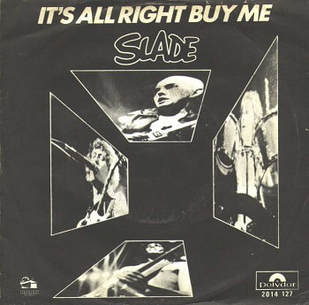 It's Alright Buy Me is a non-album single, released in France only by Barn Records in October 1978. It failed to make a chart appearance. The song was written by Noddy Holder and Jim Lea, and produced by Chas Chandler.

Background
Having returned to the UK from the United States in August 1976, Slade found themselves disregarded in favour of the emerging punk rock movement. Their 1977 album Whatever Happened to Slade had proved a commercial failure while their tour that spring had shown that they could no longer fill large venues. Slade's waning success soon led to the band playing small gigs after that, including universities and clubs.

Although they could still draw small crowds, the band's new releases were all chart failures in the UK and elsewhere. "Rock 'n' Roll Bolero" was released in October 1978 in the UK, Belgium and Germany, however in France, the decision was made to swap the A-side with the B-side, so that "It's Alright Buy Me" became the A-side. It was not a commercial success.

The lyrics of "It's Alright Buy Me", written by Holder, detail life on the road as a touring musician. The song is likely to have been first recorded around April 1978. The band re-recorded it on 17 May and again on 30 May.

Release
"It's Alright Buy Me" was released on 7" vinyl by Barn Records in France only. The B-side was "Rock 'n' Roll Bolero". "It's Alright Buy Me" remained exclusive to the French single/"Rock 'n' Roll Bolero" release until 2006 when it was included on Salvo's The Slade Box. In 2007, it also appeared on the compilation B-Sides and as a bonus track on the remaster of Whatever Happened to Slade.