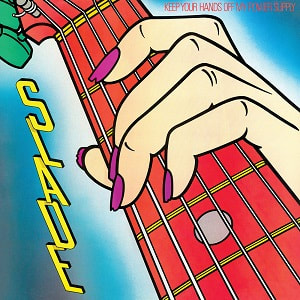 Keep Your Hands Off My Power Supply is a repackaged version of Slade's eleventh studio album,
The Amazing Kamikaze Syndrome, released in North America by CBS in March 1984. The album was largely produced by Jim Lea with John Punter producing the two singles "Run Runaway" and "My Oh My".

The album reached No. 33 in the US, giving the band their long-awaited breakthrough, while both "Run Runaway" and "My Oh My" enjoyed Top 40 success too. Keep Your Hands Off My Power Supply proved to be the band's most successful North American release in their career. In Canada, the album reached No. 26 and was certified Gold in August 1984 for 50,000 sales there.

"Run Runaway" was released first in America in March 1984. A music video was shot at Eastnor Castle in Herefordshire, which went on to receive frequent rotation on MTV. The song went on to reach No. 20 on the US Billboard Hot 100 and No. 1 on the Mainstream Rock Chart. "My Oh My" was later released in June and would reach No. 37. Keep Your Hands Off My Power Supply, released in April, reached No. 33. "Slam the Hammer Down" was also released as a promotional-only single, featuring "Hot" and "Hotter" remixes by Shep Pettibone.

The band's new-found success in America saw them set out to do a full American tour supporting Ozzy Osbourne. For their American activities, Slade were managed by Sharon Osbourne. Prior to the tour, the band played a few warm-up shows. However, on the first night of the tour with Osbourne, Slade had to cancel the remainder of the shows when Jim Lea collapsed after the first gig and was diagnosed with hepatitis. Coinciding with the breakdown of Noddy Holder's marriage, the band agreed to stop touring to allow Holder a break. This was the final time the band would tour together, although the band would continue recording and releasing new material.