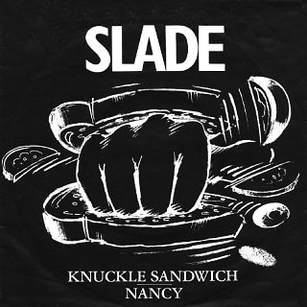 Knuckle Sandwich Nancy is Slade's first single from their tenth studio album Till Deaf Do Us Part. Released by Cheapskate Records on 15 May 1981, it failed to chart in the UK. The song was written by Noddy Holder and Jim Lea, and produced by Slade.

Background
In 1980, after a few years of low popularity and chart failures, Slade's fortunes were revived with a performance at the 1980 Reading Festival. To capitalise on the new interest in the band, they returned in January 1981 with the release of hit single "We'll Bring the House Down". An album of the same name followed in March and was also a success, reaching No. 25 in the UK. In April, the band's manager Chas Chandler secured a distribution deal with RCA Records for the Barn and Cheapskate labels, both of which Slade and Chandler had a stake in. However, by this time, things were becoming increasingly strained between the band and Chandler. They felt he was not doing enough to promote the band's new singles and also believed he was showing an increasing lack of interest in them.

Having begun recording material for their next studio album, the band wanted "Knuckle Sandwich Nancy" to be released as their new single. However, Chandler disagreed and the song was half-heartedly released on Cheapskate in May 1981, with distribution being handled by RCA. To promote the single, the band embarked on a five-date UK "Knuckle Sandwich" tour in late May-early June. When the single failed to chart, the band, standing by their decision to release it, blamed Chandler for its lack of success. They told him they no longer wanted him to manage the band, ending a twelve-year partnership. Chandler successfully negotiated with RCA, who agreed to sign the band directly to their label. Although "Knuckle Sandwich Nancy" failed to reach the UK Top 75, it did reach No. 101 on the "Bubbling Under" section of the Record Business Top 100 Chart.

Speaking to the Evening Standard in 1981, Holder said of the inspiration behind the lyrics: "It's about a bird we used to know years ago whose answer to everything was to knock fellows about. She used to ask guys for a drink and when they wouldn't buy her one she would pounce on them. She was a real character." Holder's lyrics may also have been partly inspired by an incident in 1978 when a nightclub bouncer, Desmond Brothers, assaulted him. While performing at the Stoneleigh Club, Porthcawl, Holder noticed that the bouncers were being unnecessarily rough with the crowd. After telling them to lay off, one told Holder: "I'll see you later and show you how big I am." Later, when walking back to the dressing room, Holder was assaulted by the bouncer, leaving him with a broken nose and black eyes. After pressing charges, Brothers was found guilty of assault at a trial in 1979 and was sentenced to three months imprisonment.

On its release, the single received criticism from two members of the One Parent Family Association, who accused the band of "advocating husband battering". In response, the band sent the chief of the Association a copy of the lyrics for them to examine and judge for themselves. Holder told the Evening Standard: "It's only a song. I don't think it should be taken too seriously."

Release
"Knuckle Sandwich Nancy" was released on 7" vinyl by Cheapskate in the UK only. The B-side, "I'm Mad", was an album track from the band's 1979 album Return to Base. The initial pressings of the single were released with a picture sleeve. The single was marketed by RCA.