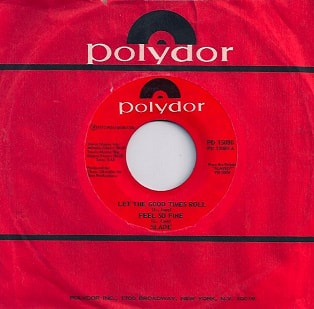 Let the Good Times Roll/Feel So Fine is Slade's fourth single from their third studio album Slayed?. Released in the United States only by Polydor in July 1973, the single reached No. 114 on Billboard's Bubbling Under Hot 100 Singles Chart.

Background
By the time Slayed? was released in late 1972, Slade had become a big success in the UK, Europe and other parts of the world. However, they had yet to make a commercial breakthrough in the United States. Both "Mama Weer All Crazee Now" and "Gudbuy T'Jane" had entered the Billboard Hot 100 Chart, as had "Cum On Feel the Noize" in June 1973. "Let the Good Times Roll/Feel So Fine" was chosen by Polydor as band's next American single. Released in July, it failed to enter the Billboard Hot 100, but did reach No. 14 on Billboard's Bubbling Under Hot 100 Singles Chart, which equated to No. 114 on the Hot 100. Despite a number of following releases in the US, "Let the Good Times Roll/Feel So Fine" was Slade's last charting single there until they achieved a commercial breakthrough with 1984's "Run Runaway".

"Let the Good Times Roll/Feel So Fine" was a regular and popular inclusion in Slade's live set during the early 1970s. "Feel So Fine" had first been performed by the first incarnation of the 'N Betweens. They recorded the song in 1965, featuring Dave Hill and Don Powell, but prior to Noddy Holder and Jim Lea's joining the band. Slade's version of the song later inspired Twisted Sister's own live performances of the track, which was also a medley of the two Shirley & Lee songs. Holder told Disc in 1972: "We don't use [the song] in our act anymore; but it was a favourite when we did. We put that down [in the studio] mainly to show Dave's guitar off a bit. We've got some good fast guitaring there."

Release
"Let the Good Times Roll/Feel So Fine" was released on 7" vinyl by Polydor in the US only. The B-side, "I Don' Mind", was also taken from Slayed?. In addition to the main release, a promotional-only version of the single was also issued, which featured "special edited version" of the song on the A-side. Exclusive to the single, this edited version cut the song down to three minutes.