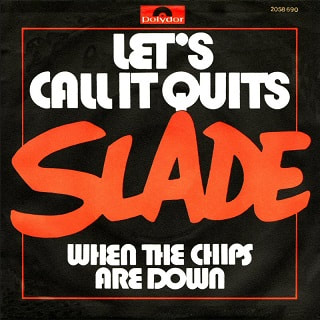 Let's Call It Quits is Slade's second single from their sixth studio album Nobody's Fools. Released by Polydor on 30 January 1976, it reached No. 11 in the UK and remained in the charts for seven weeks. The song was written by Noddy Holder and Jim Lea, and produced by Chas Chandler.

Background
By 1975, the band began feeling stale and felt they had achieved as much success in the UK and Europe that they could. Slade and their manager Chas Chandler decided that the next best career move was to try and crack America. The band agreed to move to there and build a reputation for their live performances from scratch, just as they had in the UK. In between touring, the band recorded their next album, Nobody's Fools, which saw the band move towards a more "American" soul/pop sound in attempt to gain a commercial break on the American charts.

In November 1975, the lead single "In for a Penny" was released, with "Let's Call It Quits" following in January 1976 as the album's second single. Like its predecessor, it too reached No. 11 in the UK. The song would become Slade's last Top 20 single in the UK for five years, as the band entered a period of low popularity later in 1976 on their return from America to Britain.

Upon release, the band suffered legal issues over "Let's Call It Quits" as the American musician Allen Toussaint felt the song was similar to his 1973 track "Brickyard Blues". Although Lea maintained that he had never heard the song, the band settled out of court and agreed to give Toussaint 50% of the song's royalties. In a 1986 fan club interview, Lea recalled: "We had a court case taken against us once for "Let's Call It Quits" because it sounded like a song called "Brickyard Blues", a song that I had never heard before or since. We settled it out of court and agreed to give them 50%."

In 2000, Holder appeared on The Frank Skinner Show to promote his biography Who's Crazee Now?. At the end of the show, Skinner performed "Let's Call It Quits" with Holder and Katy Hill providing backing vocals.

Release
"Let's Call It Quits" was released on 7" vinyl by Polydor Records in the UK, Ireland, across Europe, Scandinavia, Yugoslavia, Australia, New Zealand and Japan. The B-side, "When the Chips Are Down", was exclusive to the single and would later appear on the band's 2007 compilation B-Sides.

Promotion
In the UK, the band performed the song on the TV shows Supersonic and Jim'll Fix It.

Music video
A music video was filmed to promote the single, which featured the band performing the song in a room with a black and white chequered floor and surrounded with large mirrors. The band's manager Chas Chandler was reported as being disappointed with the video at the time.