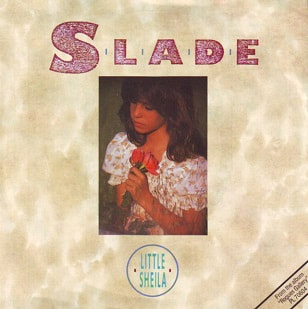 Little Sheila is Slade's fourth and final single from their twelfth studio album Rogues Gallery. It was released by CBS in North America in April 1985 and by RCA in Germany in August 1985. "Little Sheila" reached No. 86 in the US and No. 13 on the US Mainstream Rock Chart. The song was written by Noddy Holder and Jim Lea, and produced by John Punter.

Background
Having agreed to take a break from touring but still continue to record new material, the band started recording Rogues Gallery in 1984. Although the singles "All Join Hands", "7 Year Bitch" and "Myzsterious Mizster Jones" had all preceded the album's release from late 1984 onwards, none of the singles were selected for release by the band's American label CBS. Instead, "Little Sheila" was released in April 1985, and would be the only single from Rogues Gallery to be released in America and Canada.

The single followed on from the band's commercial breakthrough in America the previous year with "Run Runaway" and "My Oh My". "Little Sheila" received a good amount of radio play and was selected as a "hard choice" in late March by the influential radio and music industry trade magazine Friday Morning Quarterback. Their album report noted: "After much thought and debate, our experts have concluded that when it comes to power pop dynamics Mr. Holder's unique vocal presentation does in fact make the critical difference. We, therefore, unequivocally, advocate prompt and thorough rotation for "Little Sheila" with "Walking on Water" on the side." The song also ranked at No. 16 on the Radio & Records National Airplay AOR Tracks chart.

However, beyond the radio play, "Little Sheila" received little support from CBS other than the commissioning of a music video. The single peaked at No. 86 on the Billboard Hot 100, but fared better on the Mainstream Rock Chart, where it reached No. 13. In Canada, it reached No. 50. It became Slade's last charting single in the United States and Canada.

A version of "Little Sheila" was also recorded by Lea and his brother Frank as part of their music project The Dummies. This version of the song would not surface until 1992 when it was included on A Day in the Life of the Dummies, an album that gathered The Dummies' recordings.

Release
"Little Sheila" was released on 7" and 12" vinyl by CBS in America and Canada, and by RCA in Germany. The CBS release featured "Lock Up Your Daughters" as the B-side, which was taken from the band's 1981 album Till Deaf Do Us Part and also included on the CBS version of Rogues Gallery. In Germany, the Rogues Gallery album track "Time to Rock" was the B-side.

For the German 12" vinyl, an extended version of "Little Sheila" was featured as the A-Side. In North America, both 7" and 12" promotional versions of the single were released by CBS featuring "Little Sheila" on both sides. Only the RCA release included a picture sleeve.

Promotion
In Germany, the band performed the song on the TV shows ExtraTour and Die Spielbude.

Music video
A music video was filmed to promote the single, which was directed by Nick Morris and produced by Scott Millaney and Fiona O'Mahoney. The video features the band performing the song as part of a stage play which follows the story of the titular character. For use in the video, Dave Hill borrowed his old trademark "Superyob" guitar from Adam and the Ants' guitarist Marco Pirroni. The video is broken down into five scenes:
Released in April, the video initially received light rotation on MTV before gaining breakout rotation in May.