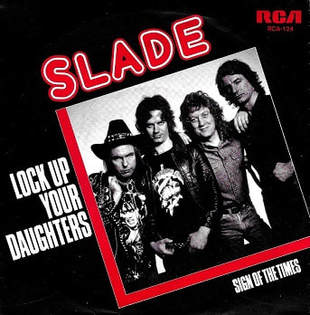 Lock Up Your Daughters is Slade's second single from their tenth studio album Till Deaf Do Us Part. Released by RCA on 4 September 1981, it reached No. 29 in the UK and remained in the charts for eight weeks. The song was written by Noddy Holder and Jim Lea, and produced by Slade.

Background
Following their revival after their performance at the 1980 Reading Festival, Slade regained success in the UK with their 1981 album We'll Bring the House Down and the Top 10 hit single of the same name. In May 1981, the lead single "Knuckle Sandwich Nancy", from the upcoming album Till Deaf Do Us Part, was released but failed to chart. In September, the band followed it up with "Lock Up Your Daughters" which was the band's first single to be released directly under their new label RCA. The single reached No. 29 in the UK, although the band were disappointed it did not match the success of "We'll Bring the House Down" earlier in the year. It was believed that sales suffered as the band's two appearances on Top of the Pops clashed with the showing of the blockbuster films Earthquake and Jaws on ITV.

"Lock Up Your Daughters" continued the band's efforts to produce a more heavy metal-influenced sound as their performance at the Reading Festival attracted followers of the New wave of British heavy metal. In addition to the song's chart success, it also became a popular addition to the band's live concerts. Speaking of the song in a 1982 interview with Kerrang!, Dave Hill said: "I thought that the playing on "Lock Up Your Daughters" was good and I can tell that the song had appeal to the metal fans. On the whole our musical direction probably lies somewhere between those two songs ["We'll Bring the House Down"]."

On 24 April 2012, Hill appeared the Professional Music Technology store in Birmingham where "An evening with Dave Hill" was presented, featuring the guitarist speaking about his career through a live interview/chat session. During the event, Hill was asked by a fan, Jonathan Ritchie, whether he ever contributed to Slade tracks without getting a writing credit. Hill revealed that he had written the guitar solo in "Lock Up Your Daughters".

Release
"Lock Up Your Daughters" was released on 7" vinyl by RCA Records in the UK, Ireland, Germany, the Netherlands and Australia. It was the first Slade single to be released by RCA, although the label had handled distribution of the band's last few singles which had been released on the independent label Cheapskate. The B-side, "Sign of the Times", originally appeared on the band's 1979 album Return to Base and was also released as a failed single from it.

Music video
A music video was filmed to promote the single, although it received little airing at the time. The video was filmed on 7 September 1981 at Portland Studios in London. In the video, Holder wore a black T-shirt with the artwork of the band's We'll Bring the House Down album.