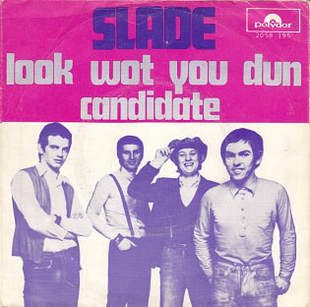 Look Wot You Dun is a non-album single, released by Polydor on 28 January 1972. It reached No. 4 in the UK and remained in the charts for ten weeks. In the United States, it was released in March 1972 by Cotillion, but did not chart. The song was written by Noddy Holder, Jim Lea and Don Powell, and produced by Chas Chandler.

Background
After achieving their breakthrough hit with "Get Down and Get with It" in 1971, Slade would continue to achieve further success with their follow-up single "Coz I Luv You", which topped the chart in October 1971. Released as the follow-up single in January 1972, "Look Wot You Dun" continued the band's success, peaking at No. 4 in the UK. In the wake of the chart-topper "Coz I Luv You", "Look Wot You Dun"'s peak position was considered a slight disappointment to the band, particularly Dave Hill who famously said: "Piano equals failure". The song was the band's second release to feature their trademark misspelling in the song title, following "Coz I Luv You". Upon its release, "Look Wot You Dun" sparked protest from teachers across the UK as it was felt that the phonetic spellings were causing confusion among pupils.

"Look Wot You Dun" was largely written by Lea and Powell. Once the basic idea of the song was formed, Lea took it to Holder who added his contributions. In particular, Lea felt the original chorus was weak. The song is notable for being the only Slade song to feature Powell providing some form of backing vocal. He provides the heavy breathing heard in the song's chorus. For the recording of the song, Hill borrowed Peter Frampton's guitar as bad weather over the Christmas period meant his guitar did not arrive at the studio as expected. In 2007, Holder recalled of the song: "We were unsure about it. We thought it was too keyboards-based and not in our usual stomp and roll style, which suited the stage, but it did have that Beatles feel, which Chas liked."

Lea told Pamela Holman of Record Mirror in 1972: "We could never reproduce "Look Wot You Dun" on stage properly. It was a good record and the excitement was there, but our stage version sounded nothing like it."

Release
"Look Wot You Dun" was released on 7" vinyl by Polydor Records in the UK, Ireland, across Europe, Scandinavia, Yugoslavia, South Africa, Australia, New Zealand, Argentina, Brazil, Lebanon and Japan. In America, it was released by Cotillion. The B-side, "Candidate", would appear on the band's 1972 European compilation Coz I Luv You, and was later included on the 2007 compilation B-Sides.

Promotion
In the UK, the band performed the song on the music show Top of the Pops. In Germany, they also performed it on Hits a GoGo.

Music videos
Two music videos were filmed to promote the single, both of which were filmed by Caravelle. The first video was filmed at Chessington Zoo in London. A second video was filmed in a studio and featured the group performing the song, with Holder wearing a magician's outfit. In 1986, Lea recalled that the video was made "with the cameras right up our noses".