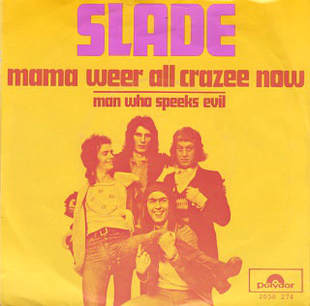 Mama Weer All Crazee Now is Slade's first single from their third studio album Slayed?. Released by Polydor on 25 August 1972, the single reached No. 1 in the UK, giving the band their third number one single, and remained in the charts for ten weeks. In the United States, the single was released in November 1972 and reached No. 76. The song was written by Noddy Holder and Jim Lea, and produced by Chas Chandler.

Background
After achieving their breakthrough hit with "Get Down and Get with It" in 1971, Slade would continue to achieve further success with their follow-up singles "Coz I Luv You", "Look Wot You Dun" and "Take Me Bak 'Ome". The 1972 live album Slade Alive! also gave the band their first success on the albums chart, reaching No. 2. During 1972, the band recorded their third studio album Slayed?, with the lead single "Mama Weer All Crazee Now", being released in August 1972. It reached No. 1 in the UK and Ireland, and was a hit across Europe and beyond.

With "Mama Weer All Crazee Now", the band and their manager Chas Chandler attempted to reach number one on the first week of release - a feat that had not been achieved since The Beatles' 1969 hit "Get Back". Initially, the band's label Polydor did not think it could be achieved, however when "Mama Weer All Crazee Now" reached No. 2 in its first week, the label changed their minds. A strategy was soon developed by Chandler and Polydor's head John Fruin to use pre-release airplay to build up pre-order sales for the band's first single of 1973. The plan worked and "Cum On Feel the Noize" reached No. 1 in its first week of release in March that year.

"Mama Weer All Crazee Now" was the first tune Lea wrote entirely on his own. Holder got the idea for the lyrics at the band's concert at Wembley Arena in London. After the show, he looked at the remains of the auditorium's smashed seating and thought "Christ, everyone must have been crazy tonight." The song was originally titled "My My We're All Crazy Now". After Holder and Lea played the song acoustically to Chandler for the first time, he thought Holder was singing "Mama We're All Crazy Now". In a 2015 interview with Classic Rock, Holder recalled of the song: "Chas loved it, but he misheard the title as "Mama..." We thought, "Bloody hell that sounds better." The name was then changed accordingly. Chandler placed a howl by Holder into the song's intro, which had been recording during a vocal exercise.

In his 1999 biography Who's Crazee Now?, Holder recalled: "We had hit on our benchmark sound. It was perfect for Slade, very raucous, but catchy and pop. It was a real powerhouse record. It had all the right ingredients, including a long playout at the end with me singing, "Mama, mama, mama, mama, yeah!" It was my ad-libbing again. Chas was fantastic for catching things like that in the studio. Musically, "Mama" took us to another level. It was a classic Slade song. Everyone loved it and everyone knew all the words."

Release
"Mama Weer All Crazee Now" was released on 7" vinyl by Polydor Records in the UK, Ireland, across Europe, Scandinavia, Yugoslavia, America, Turkey, Israel, South Africa, Angola, Australia, New Zealand, Argentina, Brazil, Mexico, Philippines and Japan. The B-side, "Man Who Speeks Evil", was exclusive to the single and would later appear on the band's 2007 compilation B-Sides.