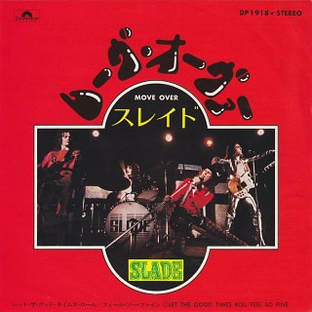 Move Over is Slade's fifth and final single from their third studio album Slayed?. It was released in Japan only by Polydor in November 1973. A cover of Janis Joplin's 1971 song, "Move Over" was written by Joplin, with Slade's version produced by Chas Chandler.

Background
"Move Over", which had become a popular stage number for the band, was recorded for Slayed? during 1972. Holder told Disc in 1972: "It goes down well onstage and we've had a lot of requests to put it down on record." By the time the album was released in late 1972, Slade had become a big success in the UK, Europe and other parts of the world. In November 1973, "Move Over" was released from the album in Japan only. The band would perform there four times in March 1974, in Tokyo, Osaka and Kyoto.

Recalling the song in his 2013 biography Look Wot I Dun, Don Powell said: "It was a great stage song. It always went down extremely well. Nod did a great job on that – also on the quiet bit, when he used to ad-lib some things. As for Jim and myself, we used to work very hard on getting our parts together. It was a good song and it was an obvious choice to record that." Noddy Holder mentioned the song in a 1990 fan club interview when speaking of the song choices for Slade's live set: "In the seventies, we’d throw something out of the act and the punters would go berserk, so we’d have to put it back in. We had to try new songs like "Darling Be Home Soon" and "Move Over" and we’d probably only leave those songs in for two tours and then we’d put them on an album when we knew they worked. "Just A Little Bit" is another case."

Release
"Move Over" was released on 7" vinyl by Polydor in Japan only. The B-side, "Let the Good Times Roll/Feel So Fine", was also taken from Slayed?.