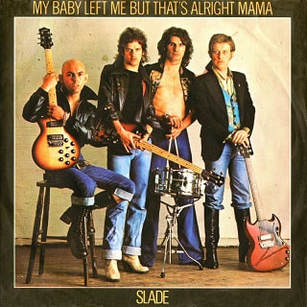 My Baby Left Me/That's All Right is a non-album single, released by Barn Records on 14 October 1977. It reached No. 32 in the UK and remained in the charts for four weeks. The song was released as a tribute to Elvis Presley, who died in August of that year. The Slade version merged "My Baby Left Me" with "That's All Right", both of which were written by Arthur Crudup and had been covered by Presley. Slade's version was produced by Chas Chandler.

Background
After their return to the UK from the United States in 1976, Slade found themselves out-of-favour at the time of the UK's punk rock explosion. The band's 1977 album Whatever Happened to Slade proved a commercial failure, as did the non-album single "Burning in the Heat of Love", while their tour that spring had shown that they could no longer fill large venues.

Later in the year, the band decided to record a version of "My Baby Left Me" as a tribute to Elvis Presley following his death in mid-August. The band had already played the song live at their American concerts in 1976. "My Baby Left Me" was recorded on 31 August at Advision Studios in London. As Dave Hill was busy doing interviews in northern England, Jim Lea played guitar on the recording.

Released in October 1977, Noddy Holder told the London Evening News: "We all really need this one to be a hit. We want to keep our stature as a world-class band - and you need top-ten records to do that." "My Baby Left Me" provided the band with a brief comeback, reaching No. 32, however it would be the band's last Top 40 single until 1981's "We'll Bring the House Down".

Release
"My Baby Left Me" was released on 7" vinyl by Barn Records in the UK, Ireland, Belgium, France, Germany and Australia.

The B-side, "O.H.M.S.", was exclusive to the single and would later appear on the band's 2007 compilation B-Sides. In a 1977 interview, Holder mentioned song to Record Mirror while speaking of the band's income tax situation: "The system here is crazy. We work for the taxman, getting 17p in the pound. In the States the top rate in income tax is 50 per cent. If they made it like that here all the exiles would come back and think of all the dollars that would come into the country. The Government, the country, everybody would be better off. Listen to the B-side of our current single - it says it all about the tax system and the homesick exiles."