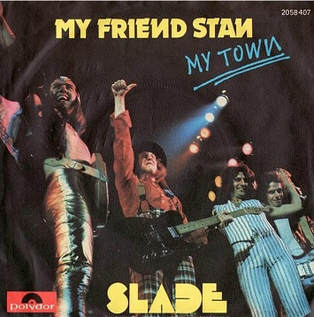 My Friend Stan is Slade's first single from their fourth studio album Old New Borrowed and Blue. Released by Polydor on 28 September 1973, it reached No. 2 in the UK and remained in the charts for eight weeks. The single received a Silver certification from BPI in October 1973. The song was written by Noddy Holder and Jim Lea, and produced by Chas Chandler.

Background
Both "My Friend Stan" and the compilation Sladest were Slade's first releases following Don Powell's near fatal car crash in July 1973. The accident threw the band's future into doubt, however Powell survived and was soon able to join the band in recording material for their new album. One of the earliest songs to be recorded, "My Friend Stan" saw Powell still walking with the aid of a stick. He had to be lifted onto his drum stool during its recording.

"My Friend Stan" was released in September 1973 and reached No. 2 in the UK. Prior to its release, Polydor had to import 100,000 copies of the single into the UK due to the high pre-order demand. It was reported in the Slade fan club that the song went on to sell the same amount of copies as the band's previous single "Skweeze Me, Pleeze Me" had, although it did not reach No. 1.

Release
"My Friend Stan" was released on 7" vinyl by Polydor Records in the UK, Ireland, across Europe, Australia, New Zealand, South Africa and Japan. The B-side, "My Town", would later appear as an album track on Old New Borrowed and Blue.

Music video
A music video was filmed to promote the single, which was recorded at the Olympic Studios in Barnes. The video portrayed the band recording the song, and features Dave Hill uses his trademark Superyob guitar.