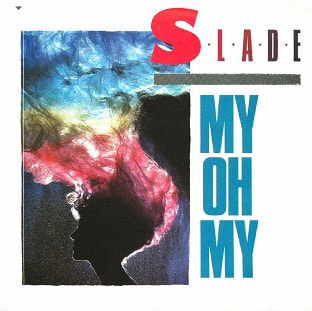 My Oh My is Slade's second single from their eleventh studio album The Amazing Kamikaze Syndrome. Released by RCA on 11 November 1983, it reached No. 2 in the UK and remained in the charts for twelve weeks. In June 1984, the song was released by CBS as the second single from the album's US counterpart Keep Your Hands Off My Power Supply. It was the band's second and last Top 40 hit in America, where it reached No. 37. The song was written by Noddy Holder and Jim Lea, and produced by John Punter.

Background
Although the band recorded much of The Amazing Kamikaze Syndrome in 1982, their label RCA felt the recorded tracks lacked chart potential and in the effort to amend that, RCA suggested the band work with producer John Punter. Holder and Lea then wrote and demoed two songs, "My Oh My" and "Run Runaway", which had been specifically created as potential singles. Both were received with enthusiasm by RCA and Punter was hired to work on the two tracks, with both being recorded in September-October. "My Oh My" was released in November 1983 and reached No. 2 in the UK over the Christmas period. It was kept from the No. 1 spot by The Flying Pickets' cover of "Only You". Following the UK/European success of "My Oh My", The Amazing Kamikaze Syndrome was rush-released by RCA in December. In January 1984, "My Oh My" was certified UK Gold by BPI. In Sweden, the song topped the chart and was awarded with a Platinum Award for sales in excess of 50,000.

The 1983 success of Quiet Riot's version of Slade's 1973 UK chart topper "Cum On Feel the Noize" led to Slade signing with CBS for their first American record deal since 1976. The label soon repackaged The Amazing Kamikaze Syndrome into Keep Your Hands Off My Power Supply and released "Run Runaway" as the lead single in March 1984. It was Slade's breakthrough hit in America, reaching No. 20, and was followed-up in June by "My Oh My". It gave the band their second and last Top 40 hit there, peaking at No. 37 on the Billboard Hot 100 and also reached No. 32 on the Billboard Top Tracks Chart.

The idea for the melody of "My Oh My" came to Lea while the band were in the dressing room prior to a concert in Wales. Lea was listening to Holder and Dave Hill tuning up. Lea later recalled: "It reminded me of bagpipes. I wrote the melody in my head to the drone of the strings." The demo version of "My Oh My" was later released as a B-Side on the 12" vinyl version of the band's 1985 single "Myzsterious Mizster Jones". It was dubbed "My Oh My (Piano & Vocal)". In a 1987 interview, Holder spoke of the lyrical changes that were made for the final version of the song: ""My Oh My" got changed because John Punter didn't like one verse in it, so we put a new verse in. I, in fact, like the original demo verse, personally!"

In a 1987 fan club interview, Hill singled "My Oh My" as his favourite Slade single: "Although I didn't like "My Oh My" when I first heard it, by the time I started playing on it and promoting it, I discovered a certain magic and hidden power in it. I would say "My Oh My" is my favourite to date."

Release
"My Oh My" was released on 7" and 12" vinyl by RCA Records in the UK, Ireland, across Europe, Brazil, Mexico, South Africa, Australia, New Zealand and Japan. It was released by CBS in America and Canada. The B-side on all RCA versions of the single was "Keep Your Hands Off My Power Supply", which was originally exclusive to the single. The 12" vinyl, released in the UK, Germany and Mexico, featured an extended version of "My Oh My" as the A-side and a second B-side "Don't Tame a Hurricane", which again was initially exclusive to the single. Both B-sides would appear as album tracks on the Keep Your Hands Off My Power Supply album. On the CBS releases, the album track "High and Dry" appeared as the B-side. In the UK, a limited edition 7" vinyl was also released, containing an additional track "Merry Xmas Everybody (Live & Kickin')", which had previously appeared as the B-side to the band's 1982 single "(And Now the Waltz) C'est La Vie".

Music video
A music video was filmed to promote the single, which was directed by Keith Coe. It was shot in London during 1984 for the American market. The video depicts Slade walking in the countryside and one by one get picked up by an articulated lorry which has an open stage on the back. The band are seen performing the song on the lorry as it drives along. Arriving at London's Surrey Docks for a concert, the final destination shows the band surrounded by schoolchildren waving Slade scarves. The children had been drafted in by a convoy of coaches for the filming. Like the "Run Runaway" video, "My Oh My" received regular airings on MTV.

In a 1986 fan club interview, Holder spoke of the version: "It came about originally because a few people asked us for demos of songs to cover. A lot of people wanted to cover "My Oh My". I mean 'middle of the road' sort of people. Colin actually suggested it, saying we couldn't send them our own version, because they've all heard that. Anyway, we had people like Frank Sinatra saying that we ought to do a 'swing version' of it. Well, we weren't going to do it, so we got a mate of ours - Monty Babson - to sing it on the original demo, which went out to all these 'middle of the road' people. When I heard it, I really liked it, so as an added extra on the 12", I said "Why don't we put my voice with Monty Babson's band?" and that's what we did. I just had a couple of drinks in the pub and went and sang with him in one take. We didn't spend any time on it or anything."