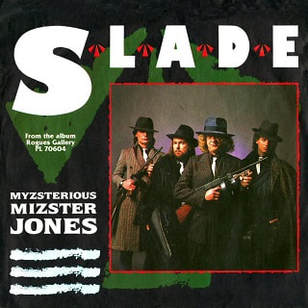 Myzsterious Mizster Jones is Slade's third single from their twelfth studio album Rogues Gallery. Released by RCA on 15 March 1985, it reached No. 50 in the UK and remained in the charts for five weeks. The song was written by Noddy Holder and Jim Lea, and produced by John Punter.

Background
Having agreed to take a break from touring but still continue to record new material, the band started recording Rogues Gallery in 1984. Although the late 1984 single "All Join Hands" reached the UK Top 20, the following single, "7 Year Bitch", stalled at No. 60 after it was banned by a number of UK broadcasters. In the hope of recovering from the "backlash", "Myzsterious Mizster Jones" was released as the album's third single in March 1985, two weeks prior to the release of the album. Despite the song's radio-friendly sound, the single peaked at No. 50 in the UK.

In a 1985 interview on Australian TV, Holder spoke of the song's titular character: "It's about a friend of mine from Wolverhampton who used to be a Hell's Angel actually, but I changed his name to protect the innocent 'cause I don't think he'd like a song about him. It's not knocking him, you know, but it's a song about him." The song's title was purposely misspelled—a trademark of a number of Slade songs, particularly of those in the early 1970s. "Myzsterious Mizster Jones" was the first Slade single to feature a misspelled title since 1973's "Skweeze Me, Pleeze Me".

In a 1986 fan club interview, Lea revealed that he had come up with the song's melody while holding a conservation. He said: ""Myzsterious Mizster Jones" was written while I was talking to my brother in a pub. I was holding a conversation and wrote it at the same time." Later in the mid-1990s, Lea commented on the song to Ken Sharpe: "Yeah, yeah, it's alright. You know, it's like, umm, being a sort of 'singles' person, you know, 45's are they were, I used to write in that mode, and that, I never saw that as a 45. When I came up with "Gudbuy T'Jane", I knew that was a single. "Mama Weer All Crazee Now", "Cum On Feel the Noize", "Skweeze Me Pleeze Me", you know that's a single. And the worst singles are the ones like "Myzsterious Mizster Jones" which were never gonna be singles. I sound very derogatory to my own material, I don't mean it like that. I like "Myzsterious Mizster Jones", but it was never, 'wow, that's a single', you know? It's just a good track."

Release
"Myzsterious Mizster Jones" was released on 7" and 12" vinyl by RCA Records in the UK, France, Germany, the Netherlands, New Zealand and Australia. The B-side, "Mama Nature Is a Rocker", was exclusive to the single and would later appear on the band's 2007 compilation B-Sides. On the 12" single, an extended version of "Myzsterious Mizster Jones" was featured as the A-side, and a second B-side, "My Oh My (Piano & Vocal)" was also included; a demo-like version of the band's 1983 hit "My Oh My". On the single, it was labelled as a "Special Collectors Edition" of the song.

The single came with a full-colour picture sleeve featuring photography by Alan Ballard. For the front cover photograph, the band dressed in gangster suits. Dave Hill and Lea held guitar cases, while Holder and drummer Don Powell each held a Thompson M1921 submachine gun. In the UK, a limited edition 7" vinyl picture disc was also released in addition to the standard version. In France, the song was released as a promotional single only, with "All Join Hands" as the B-side.

Promotion
In the UK, the band mimed the song on the BBC children's television show Saturday Superstore. In Europe, the song was mimed on the German TV shows ExtraTour and Die Spielbude.

Music video
A music video was filmed to promote the single, which was directed by Phillip Davey. Described in 1986 as Lea's personal favourite of all Slade videos, it depicted the band as gangsters in a warehouse where they perform the song while the production of prohibition whiskey is shown in other shots.

At the time of the single's release, the band minus Powell appeared on Sky Tracks for the video's debut airing. During their appearance, Holder described the video as "fabulous". The video received widespread play across European programmes. In April 1985, Music & Media listed the video as one being "well aired" across the continent. It received "heavy action" on Music Box. In a 1986 fan club opinion poll, fans voted the video at No. 2 for the band's best three music videos.