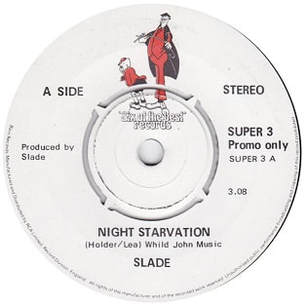 Night Starvation is a promotional single, released by Six of the Best/Barn Records on 13 June 1980 from the band's first extended play Six of the Best. The song was written by Noddy Holder and Jim Lea, and produced by Slade.

Background
Following the commercial failure of their 1979 album Return to Base, Slade's next release would be the extended play Six of the Best in May 1980. Featuring six tracks, it had a low selling price of £1.49, in the effort to boost sales. The EP's featured track "Night Starvation" was released as a promotional-only single in June in the attempt to gain radio airplay, followed by "Nine to Five". However, the EP failed to chart and both promotional singles were unsuccessful in generating sufficient airplay.

Release
"Night Starvation" was released on 7" vinyl by Six of the Best/Barn Records in the UK only. It was manufactured and distributed by RCA Records. The B-side, "When I'm Dancin' I Ain't Fightin'", was also taken from Six of the Best. "Night Starvation" would later re-appear on the band's 1981 studio album We'll Bring the House Down, released during their comeback following a performance at the 1980 Reading Festival.