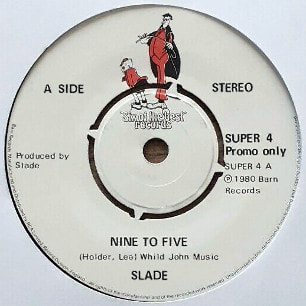 Nine to Five is a promotional single, released by Six of the Best/Barn Records in 1980 from the band's first extended play Six of the Best. The song was written by Noddy Holder and Jim Lea, and produced by Slade.

Background
Following the commercial failure of their 1979 album Return to Base, Slade's next release would be the extended play Six of the Best in May 1980. Featuring six tracks, it had a low selling price of £1.49, in the effort to boost sales. The EP's featured track "Night Starvation" was released as a promotional-only single in June, but it was not successful in generating sufficient airplay on radio. Shortly after "Night Starvation", "Nine to Five" was also issued as a promotional single, but it too suffered the same fate and failed to boost sales of the EP.

Only a limited number of copies of "Nine to Five" were produced. In January 2021, a copy auctioned on eBay sold for £460.

In a 1980 fan club interview, Holder spoke of the Six of the Best EP and the band's struggles at that time: "After Return to Base, there was a period of us writing songs and seeing how they turned out. Like "When I'm Dancin' I Ain't Fightin'" and "9 to 5" - to us they were all good songs - but they didn't sell huge quantities of records."