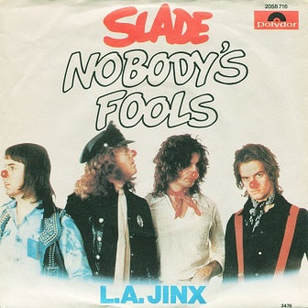 Nobody's Fool is Slade's third and final single from their sixth studio album Nobody's Fools. Released by Polydor on 9 April 1976, it failed to chart in the UK Top 50, but reached No. 3 on the BMRB's UK Breakers Chart. The song was written by Noddy Holder and Jim Lea, and produced by Chas Chandler.

Background
By 1975, the band began feeling stale and felt they had achieved as much success in the UK and Europe that they could. Slade and their manager Chas Chandler decided that the next best career move was to try and crack America. The band agreed to move to there and build a reputation for their live performances from scratch, just as they had in the UK. In between touring, the band recorded their next album, Nobody's Fools, which was released in March 1976. Like the title track, the album saw Slade move towards a more "American" soul/pop sound in attempt to gain a commercial break on the American charts.

Lea had originally intended for "Nobody's Fool" to be a "twenty-minute extravaganza". However, the band later agreed to cut the duration and record the song in a more standard format as it was felt that otherwise it would not appeal to the band's fanbase. The song featured Tasha Thomas on backing vocals. Released as a single in April 1976, it was the third single to be released from the album. For its release as a single, the song was edited to reduce its duration. In the UK, the song failed to reach the UK Top 50, breaking Slade's run of seventeen consecutive hits. It reached No. 3 on the BMRB's UK Breakers Chart, which would be equal to No. 53 on the UK Singles Chart at a time when the national singles chart only ran to the Top 50. In America, "Nobody's Fool" was the only single to be released from the album, but like the album, it was not a commercial success.

Release
"Nobody's Fool" was released on 7" vinyl by Polydor in the UK, Belgium, Germany, Yugoslavia, Canada and Brazil. In America, it was released by Warner Bros. Records. The B-side on the Polydor releases of the single was the Nobody's Fools album track "L.A. Jinx". In America, "When the Chips Are Down" featured as the B-side, which was previously the B-side to the 1976 single "Let's Call It Quits". In Brazil, "Nobody's Fool" was released as a four-track extended play, including "Let's Call It Quits", "In for a Penny" and "Can You Just Imagine".

Music video
A music video was filmed at St. Johns Wood Studios in London by the production company Trilion Video. It was directed by Bruce Gowers, who directed Queen's "Bohemian Rhapsody" video the year before. Despite being Slade's most complex video at that time, it would only be shown once in the UK on Sally James's London Weekend Television show Saturday Scene.