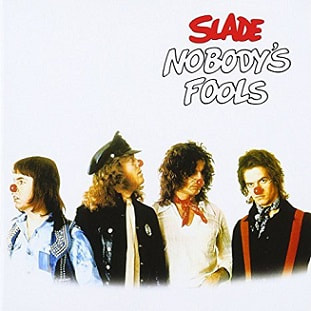 Nobody's Fools is Slade's sixth studio album, released by Polydor on 5 March 1976. Produced by Chas Chandler, it reached No. 14 in the UK and remained in the charts for four weeks.

Musically, the album showed the band moving towards an "American" soul/pop sound. Tasha Thomas was also hired to provide backing vocals - the first Slade album to feature female backing. British fans accused the band of "selling out" and forgetting about their fanbase in the UK, as the band had been in the States for most of 1975, trying to crack the market. The album was Slade's first (since their rise to fame) not to reach the UK Top 10, and to drop out of the chart after a chart run of only four weeks. It would be their last album to make a UK chart appearance until the 1980 compilation Slade Smashes!.

Background
Since their rise to fame in 1971, Slade had failed to achieve a major breakthrough in the United States. During the period of 1972–73, the band began touring there as a step towards trying to crack the market. A number of cities took positively to Slade, including St Louis, Philadelphia and New York City. However, in other areas, the band's anthemic, audience participation-dominated act was less enthusiastically received. By 1975, the band began feeling stale and felt they had achieved as much success in the UK and Europe as they could. Slade and their manager Chas Chandler decided that the next best career move was to try and crack America. The band agreed to relocate there in the effort to built a live reputation from scratch, much like they had done in the UK. Holder said in 1975: "During the past five years when the band peaked, we did five major tours of Britain, six tours of Europe, two tours of Australia, two of Japan, visited the USA a few times, made a film... you can understand why we felt more than a little jaded. We reckoned that we needed to undertake a fresh challenge to regain that old spark."

In Spring 1975, Slade relocated to New York City and throughout the year, the band toured constantly, often second on the bill with the likes of Aerosmith, ZZ Top and Black Sabbath. While live success in certain areas of America wasn't translated into airplay, the band felt improved and rejuvenated. In between tours, Holder and Lea got down to what Holder called some "serious writing". In mid-1975, the band booked themselves into New York's Record Plant and recorded the album Nobody's Fools. Speaking in a 1976 fan club interview, Holder said of recording an album in America: "The album is why we went to the States, not for tax reasons, folks! We wanted to get fresh ideas, we felt we were getting a bit stale living in England." For the album, Holder and Lea drew much inspiration from living in New York City.

The album's lead single, "In for a Penny", was released in November 1975 and reached No. 11 in the UK. The second single, "Let's Call It Quits" also peaked at No. 11 after its release in January 1976. The album was released in March and reached No. 14. A third and final single, "Nobody's Fool", broke Slade's run of 17 consecutive hit singles in April, reaching only No. 53. In America, "Nobody's Fool" was the only single to be released from the album, however the neither the album or single made any chart impact. Reflecting on the album in an early 1986 fan club interview, Hill said: "Nobody's Fools was a bit different, wasn't it? That was recorded in America, but it didn't happen over there."

The album has been noted for still standing up today as a "varied and highly entertaining listen" and the band themselves remain proud of the album. Both Don Powell and Holder rate it as their favourite Slade long player. In 1976, Holder told the fan club magazine: "We're really proud of the album. We think it's our best, but we always say that every time we bring another one out. However, there is something special about this one." Later in a 1987 interview, he said: "That is the only [Slade album] I can really sit down at home and listen to from start to finish." In a 1976 interview, Lea said: "I am really proud of the album and believe it is the best album we have ever done. I have no especial favourite track on the album - I love them all. I'm sure you will see quite an American influence on a lot of the tracks and we believe the hard work we put in, in America had paid dividends."

Recording
In a 1976 fan club interview, Holder spoke of the album's recording: "We recorded the album in New York, where we spent something like six weeks on it. We did it all in one go, more or less, well we also did a couple of days in a L.A. studio a couple of months before, just to get into the swing of things." To allow the band to create what Holder described as a "really first class album", the band decided to take some time off from touring: "We decided not to rush the album, like we have done on past recording sessions. We wanted to get everything just so. It wasn't just a 'wam bam' job. We had six weeks in the studio to get better and better, so the playing got better, and the sound got better, so yeah in terms of improvement it's a big step ahead. The sound and production is the best yet."

Speaking of the musical influences on the album, Holder revealed: "Ya know we've been influenced by a lotta things, particularly soul. We used some coloured chicks for back-up vocals and I really enjoyed working with them, it was something different for us, and at the same time it gave our a lot of body! Those girls have great voices. We enjoyed doing all sorts of sounds, like country, funk, rock. I mean every track has its own particular style."

Lea also revealed in a 1976 fan club interview: "We just got a terrific buzz when we were working on the album. We were more relaxed than we've ever been, more willing and able to be more experimental in the studios, and we took it easy and relaxed. Certainly we felt we had a good product in the making, so it seemed right to put everything we had into it."

Title and packaging
The band decided to call title the album after "Nobody's Fool". While listening to that track one day, they came up with the idea of adding an 's' to 'Fool'. The album's cover was created to coincide with the band's 10th anniversary, showing the band adopting the same positions as they had on the cover for their 1970 album Play It Loud.

Critical reception
Contemporary reviews
Retrospective reviews
Song information
As a result of their experiences in the United States, Nobody's Fools presents a different musical direction. Described as having a "California" sound by AllMusic, a genre popular at the time from bands such as The Eagles, the album explores various different genres. AllMusic said that "many of the numbers on this record are loaded with Dobros, mandos, and female background vocals." The album features a strong influence from soul music, most prominently on the songs featuring female backing vocals.