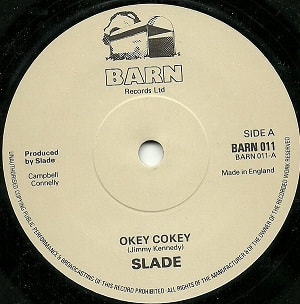 Okey Cokey is a non-album single, released by Barn Records on 7 December 1979. It failed to make a chart appearance in the UK. A cover of the novelty party song, it was written by Jimmy Kennedy, and produced by Slade.

Background
"Okey Cokey" was released at a time when Slade were experiencing a low wave of popularity and commercial failure. The band were restricted to playing small venues, including universities and clubs, and although they could still draw small crowds, the band's new releases were generally chart failures. "Okey Cokey" was released in December 1979, following the commercial failure of their eighth studio album Return to Base.

The song was released in the attempt to capitalise on the Christmas period. Both Noddy Holder and Dave Hill had pushed for the song to be recorded. Speaking to John Haxby in 2007, Jim Lea said: "The phone call was "If you don't turn-up in the studio we'll make it without you." Lea later cited the song, along with the 1985 album Crackers, as a "credibility problem for me personally". The song was recorded on 6 November; in his diary entry for that date, Don Powell commented: "Spent all day recording the fucking awful "Okey Cokey". Aargh....."

"Okey Cokey" was another commercial failure for the band, failing to make a chart appearance. In his 2017 autobiography So Here It Is, Dave Hill said of the song: "We were the only serious band that could have put "Okey Cokey" out as a single! That was a reflection of just how lost we were at that time, but because we'd get the audience jumping round to it at gigs, we recorded it. The record pluggers were totally embarrassed to take it to the Radio 1 playlist, but it was a really funny record."

Release
"Okey Cokey" was originally due to be released by RSO Records in November 1979 as a one-off deal between the band and the label. However, the deal collapsed and no copies were pressed. Instead, the single was released on Chas Chandler's Barn Records. It was released on 7" vinyl in the UK only, and was distributed and marketed by Pinnacle Records. The B-side, "My Baby's Got It", was taken from the Return to Base album.

Later in December 1982, "Okey Cokey" was given a re-release on Frank Lea's Speed Records. Slade's then-label RCA had given Lea the rights to release the single. The B-side was "Get Down and Get with It", recorded live at the 1980 Reading Festival. In addition to the standard 7" vinyl release, a picture disc version was also issued. The re-release failed to enter the top 100, peaking at number 136 in January 1983.

The song had also appeared on other Slade releases. A fake "live" version of the song appeared on the band's 1980 extended play Xmas Ear Bender. The band added crowd noise added at the beginning and end of the original studio recording to fit in with the other tracks on the EP. It was later included as an album track on Crackers.

Promotion
No music video was filmed to promote the song. The band performed the song on UK TV twice in December. On the show Get It Together, they performed the song along with "My Baby's Got It" and on Southern Television, they performed it along with "Merry Xmas Everybody". In Music Week, an advert for the single was published, which stated: "This 45 will be the Christmas Party Smash!" Another magazine advert suggested: "Slade's new single is a must for every party".